Our cover photograph this week shows the wings and engines of the Imperial Airways liner Scylla. Details of the Scylla will be found in the chapter “From Balloons to Flying Boats” in this week’s Part.

From Balloons to Flying Boats

From Balloons to Flying Boats

TWIN-ENGINED BOMBERS IN FORMATION FLIGHT. These Boulton Paul Overstrand aircraft are fitted with Bristol Pegasus II nine-cylinder radial engines. A feature of this type of machine is the gun-turret in the nose, which completely encloses the gunner and thus affords him protection from the force of the wind. Overstrands were designed in two types, one of  which had a mechanically-operated gun-turret that could be trained in the direction desired without any manual exertion.

DISMANTLING THE AEROPLANE from which were seen the four Russian scientists who had been left near the North Pole. With their dog, they spent nine months on a drifting ice floe, which covered about 1,000 miles in the direction of the coast of Greenland. This aeroplane, carrying supplies and letters, landed on the ice floe about a mile from the camp of the scientists.

Nearly half the territory of the Union of Soviet Socialist Republics lies north of the 62nd parallel, and this vast area is being developed with the aid of the aeroplane. This development is controlled by the Central Administration of the Northern Sea Route, which was founded in 1932. This chapter is written by Sidney Howard, and is concluded from part 9.

The values of various aeroplane groupings in times of peace and war. War flying was responsible for the introduction of formation flying on a large scale. All formations in the air are built up on the foundations provided by a leader and a sub-leader or sub-leaders, whose aeroplanes are appropriately marked, so that they can be readily distinguished by all other members of the group. Even formations of exceptional size, such as that seen at the last Royal Air Force Display at Hendon, conformed to this method of building. In this chapter Major Oliver Stewart describes all aspects of formation flying.

You can read about the Art of Aerobatics in part 3.

NINE HAWKER HARTS flying in V formation. Each pilot, except the leader, keeps station by watching closely the machine in front. So closely does the pilot have to watch the next machine that he flies by comparison with it and by nothing else; he may not even notice the ground. Thus the movements of the formation depend entirely on the leader.

A FLIGHT OF HAWKER FURY AIRCRAFT in close formation. The aircraft are single-seaters. The leader in such circumstances flies well below his maximum speed, so that the other pilots may have ample reserve of power to catch up when necessary to maintain their position. Close formation flying calls for continual “juggling” with the throttle, and the pilots have to beware of opening up too much or shutting down too suddenly, to avoid making the formation appear ragged.

A SQUADRON IN CLOSE FORMATION. The machines are Hawker Demons, fitted with Rolls-Royce Kestrel V supercharged engines. The aircraft are two-seater fighters. Formation drill, which consists in changing from one type of formation to another, is essentially a parade or practice manoeuvre. Open formations would be adopted in time of war, one of the reasons being that damage by anti-aircraft guns would be less likely to prove extensive than if the machines were in close formation.

Exploratory air journeys to and from Rangoon, the Cape and Australia undertaken by Sir Alan Cobham. On November 20, 1924, he set out on the first of his remarkable series of long-distance survey flights. Accompanied by Air Vice-Marshal Sir Sefton Brancker, he flew from London to Rangoon and back, a distance of some 17,000 miles. Within six months of his return, Alan Cobham was in the thick of preparations for his second survey flight, to Capetown. Then, only three months after his return from Capetown, he set out on his greatest flight, London to Australia and back. This chapter is by P R Bird and describes these three flights.

Click on the icon to listen to Sir Alan Cobham’s 1926 recording of his flight to Australia. The original recording was called “To Australia and Back in Six Minutes”

A second article on Cobham’s flight around Africa appears in Part 23.

HAVING COMPLETED THE ENGLAND-AUSTRALIA-ENGLAND FLIGHT, Cobham alighted in London on the River Thames on October 1, 1926. In 320 flying hours he had covered 28,000 miles. For his survey flight to and from Australia Cobham again used a DH 50 biplane, but he fitted seaplane floats instead of a land undercarriage, as he had decided that a seaplane was preferable to a landplane for the journey. For the fight across Australia from Darwin to Sydney, Melbourne, Adelaide and back to Darwin, the DH 50 was temporarily converted into a landplane.

TAPERED MONOPLANE WING of the Hendy Heck, with the leading edge slot open and the flaps at the trailing edge down as for landing. A higher speed in the air is made possible by the use of the retractable undercarriage, which, when the aeroplane is in flight, is withdrawn into the cavities in the wings.

How mining has been rapidly developed in inaccessible country by air transport. Commercial aviation has no romance greater than that of the opening up by aircraft of the goldfields in the Mandated Territory of New Guinea. Daring, skilful pilots, in collaboration with mining experts, defeated mountains, jungle, cannibal tribes and country that defied other means of transport. This chapter is written by Sidney Howard, and is concluded in part 11.

SINGAPORE I FLYING BOAT. First produced in 1926, this machine was the first flying boat with an all-metal airframe to be supplied to the RAF. The wings and tail-unit surfaces were covered with fabric. The picture shows a 1929 Singapore I of modified design. It was fitted with Rolls-Royce Buzzard engines and had Handley Page slots fitted to the upper plane. The hull was provided with a new planing bottom.

A JUNKERS MONOPLANE used for transporting gold from the goldfields of New Guinea to the coast. This picture was taken at Lae Aerodrome, near the mouth of the Markham River. In 1927 Lae was made the base for aeroplanes taking miners and machinery to Wau, where the first mining centre was established. The distance to Wau was only about 70 miles, but the intervening country was difficult to traverse. 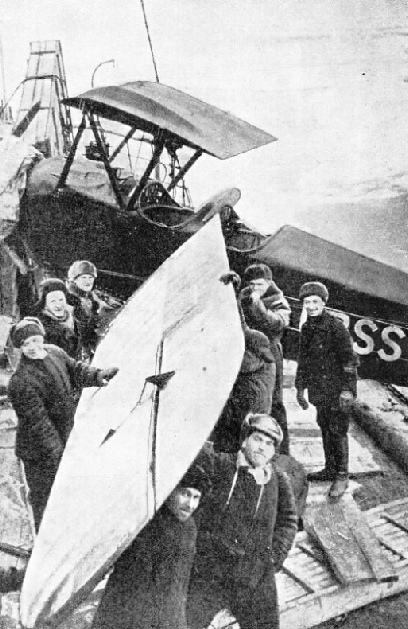 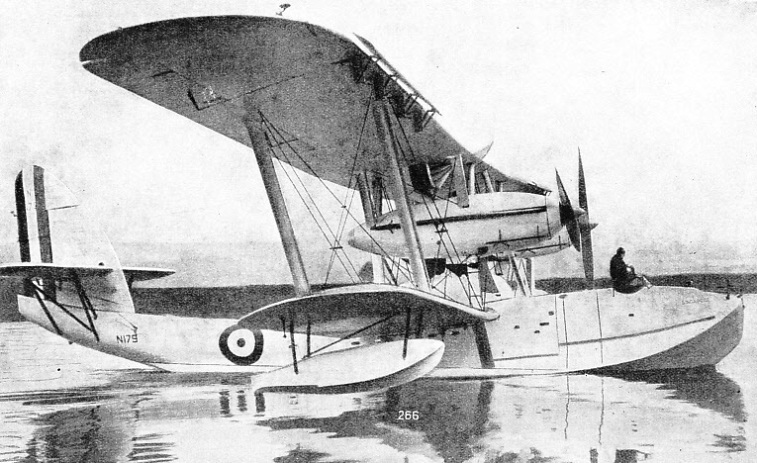 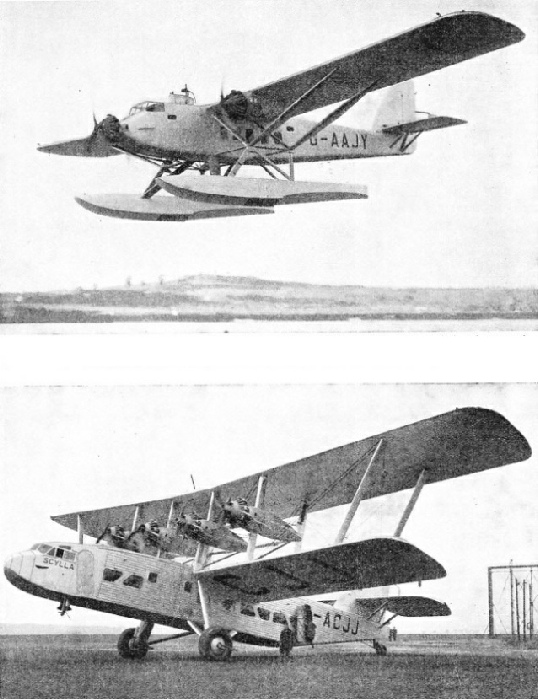 From Balloons to Flying Boats - 2

SPECIALLY BUILT FOR THE AIR MINISTRY IN 1930, the Valetta was designed to obtain data of the relative merits in performance and seaworthiness of a large float seaplane compared with a flying boat of the same power. The machine was used by Sir Alan Cobham for one of his survey flights over Africa. Later a wheel undercarriage was fitted experimentally to test the performance of the aircraft as a landplane. The Valetta had three 540 horse-power Bristol Jupiter engines and seating for sixteen passengers.

THE SCYLLA FOUR-ENGINED AIR LINER has the same type of superstructure as the Short Scipio flying boat. A fuselage and undercarriage are substituted for the hull and wing-tip floats. The Scylla has a seating capacity of thirty-nine, in addition to a crew of four. Bristol Jupiter engines give a total horse-power of about 2,400. 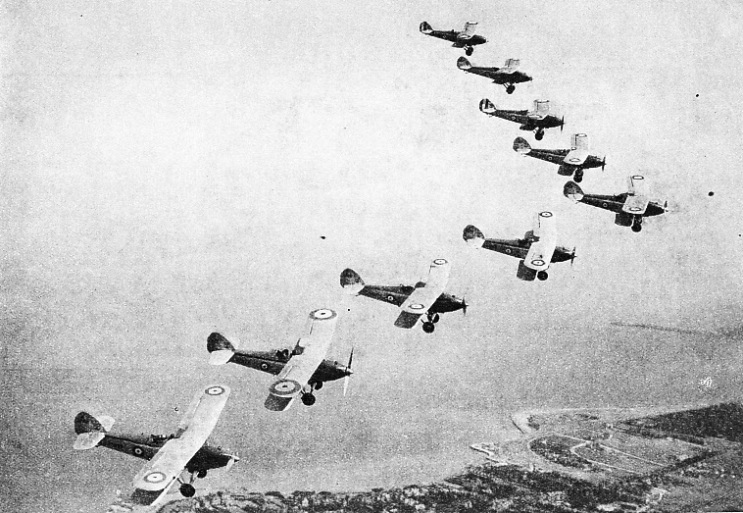 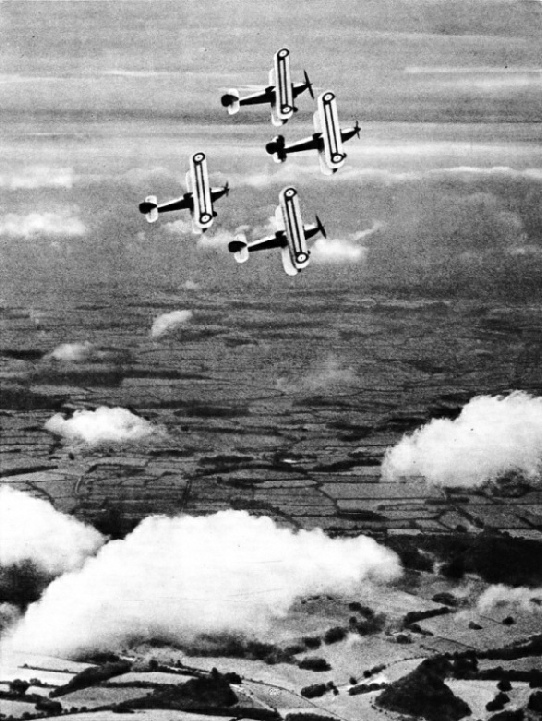 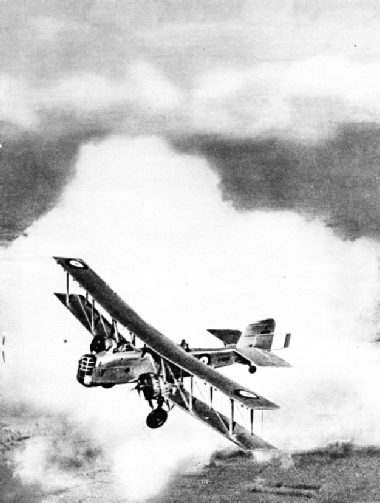 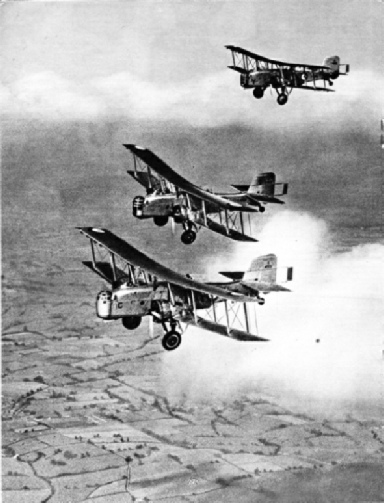 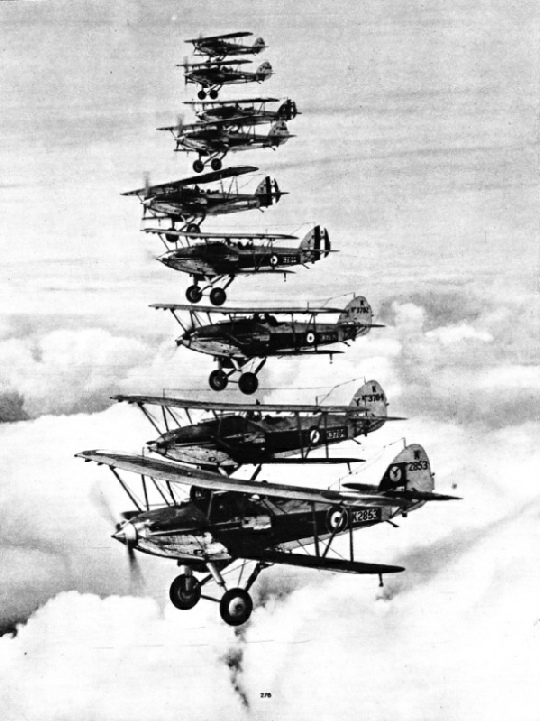 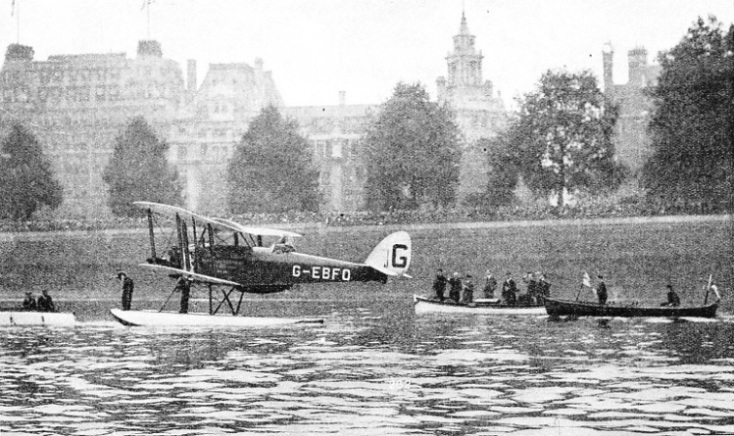 Developments which relate efficiency to economy. The wing loading of an aeroplane is a figure obtained by dividing the weight of the machine by the area of its main planes. Wing loadings have shown a constant tendency to increase. Before 1914 a wing loading of 10 lb per square foot of wing was considered high, but more recently biplanes have been loaded up to 18 or 20 lb per square foot. With monoplanes it is possible to go to much higher loadings.  This chapter is written by Marcus Langley, who discusses all aspects of wing loading problems. 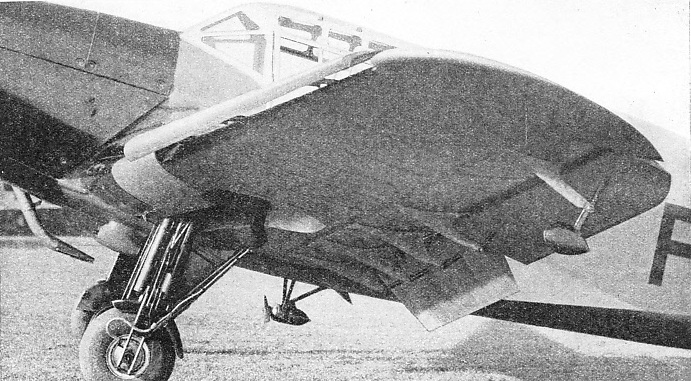