The subject of our cover picture this week is the Avro Anson in flight. This twin engine coastal reconnaissance monoplane is powered by two Armstrong Siddeley Cheetah IX radial air-cooled engines, which develop 310 horse-power at 2,100 revolutions a minute at 6,000 feet. The retractable undercarriage, which is an important feature of this design, is well shown in the illustration.

This picture later appeared as the colour plate with Part 30. 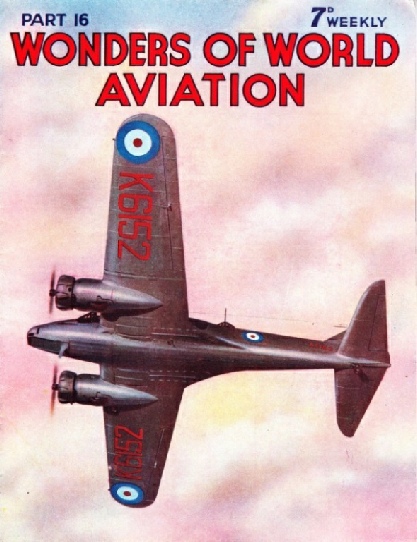 One of the most important branches of aviation is that of aero engineering. Openings for aero engineers are more numerous than are those for pilots. Engineers are required not only to design and build machines, but also to maintain them. Trained engineers can obtain posts as salesmen and in administrative positions at the various airports.

So important is this branch of aviation that it is impossible for anyone to become a ground engineer unless he holds a licence issued by the Air Ministry, this licence can be obtained by the passing of an examination.

The best way to obtain training in any branch of aero engineering is to take a course at one of the schools which exist for that purpose. Training at such a school will involve two to four years in time and between £200 and £300 in money. Lack of money, however, need not prevent anyone from being trained as an aero engineer, as it might prevent anyone from being trained as a pilot. Practical training may be had in aircraft factories where, from time to time, openings occur for apprentices. Theoretical training can be had, or can be amplified, from evening classes at technical schools or from a correspondence course.

This chapter by Arthur Clark gives a comprehensive survey of the training required for a career as an aero engineer.

ENCLOSED COCKPITS, such as that on this Hawker Hurricane, are a feature of modern single-seater fighters. With speeds approaching 400 miles an hour, it is necessary to give the pilot the shelter of a closed cockpit if he is to be able to discharge his duties efficiently. High speed and good manoeuvrability are the essential requirements in a fighter aircraft.

Another View of the Catapult at Leuchars

THE TROLLEY IS AUTOMATICALLY STOPPED when it reaches the end of the runway on the catapult and the aeroplane is releases. This photograph, taken immediately after the machine had left the trolley, shows another view of the catapult at Leuchars. Pilots of catapulted aircraft have to take special precautions to prevent dislocation of the neck due to the sudden acceleration.

How heavily-loaded aeroplanes are enabled to take off from confined spaces using power-driven catapults. This chapter is by T Stanhope Sprigg, and is concluded from part 15.

The Hon. Charles Stewart Rolls was the first Englishman to fly over the English Channel and the first aviator to make a non-stop return flight between Great Britain and France. This chapter is by H. G. Castle and is the eighth article in the series on Makers of Air History.

ETHYLENE GLYCOL INSTEAD OF WATER is used for cooling on modern fighters. Ethylene glycol, and similar substances, can be worked at a higher temperature than water. They therefore require a smaller cooling area. The radiator is arranged at the end of a specially shaped air scoop. Such a scoop is seen underneath the fuselage of this British fighter, the Hawker Hurricane. Not only has this aircraft a retractable undercarriage, but the tail wheel is also retractable.

Pilots now depend far more upon their instruments than they did in the early days of flying, because flying in bad visibility or in thick cloud is not common. Instruments do not always tell the truth, but they are much more truthful in an aircraft than the sensations communicated to the pilot by changing attitudes at a time when visibility is poor and no horizon is visible. Some simple principles are incorporated in the instruments in which pilots rely, and these are explained in this chapter by Wing Commander G. W. Williamson.

THE PENDULUM DEVICE in the centre of this picture of a dismantled turn indicator operates the pointer which indicates sideslip. The lower pointer is controlled by the gyroscopic device in the left-hand bottom corner of the picture. Air is sucked through the nozzle shown to the right of the gyroscopic device and drives the gyroscope by impinging on buckets on the periphery of the wheel.

This chapter tells the romantic story of Colonel Lindbergh. By his superb flight from New York to Paris in 1927 Lindbergh earned a place among the immortals, but his career is particularly worthy of study because he is typical of the post-war young men who have set out with the specific intention of making aviation their career. He was essentially a professional aviator, and his flight to Paris was the culmination of a long and arduous apprenticeship to flying. In spite of the tumult and the shouting that greeted his achievement, in spite of the flattery and the adulation he received, Lindbergh remained what he had set out to be, a professional pilot. It will be seen from this chapter that his most valuable contribution to aviation was not his great flight, but his pioneer work as a pilot on the air mail route from St. Louis to Chicago.

Written by H. G. Castle, the article is concluded in part 17.

Lindbergh Preparing to Take Off from Le Bourget, Paris

OFF TO BRUSSELS after his epic flight. Lindbergh preparing to take off from Le Bourget, Paris, in his aeroplane, the Spirit of St. Louis, to fly to Belgium. In spite of all the feting he received, Lindbergh remained the unassuming professional pilot he had set out to be.

ALL TYPES OF CONSTRUCTION must be understood by an aero engineer. This photograph shows the building of an all-metal fuselage frame in which the various tubular members are joined together by welding. There are several forms of welding, all of which are covered during a course of aeronautical engineering.

PUPILS ASSEMBLING AIRCRAFT ENGINES. In the foreground of this photograph, which shows students at the De Havilland Aeronautical Technical School, is an inverted type engine with the upper half of the crankcase removed. The big ends of the connecting rods attached to the two end cranks are visible. The second student from the left is checking clearances by means of feeler gauges, which measure accurately to one-thousandth of an inch.

TWO-SEATER FIGHTERS have been used successfully in the Royal Air Force. Today, however, the dingle-seater is the only type in production for the RAF. This picture shows Hawker Hart biplanes flying in formation. The Hawker Hart is a basic type of aircraft for a number of service types of aircraft including two-seater fighters. 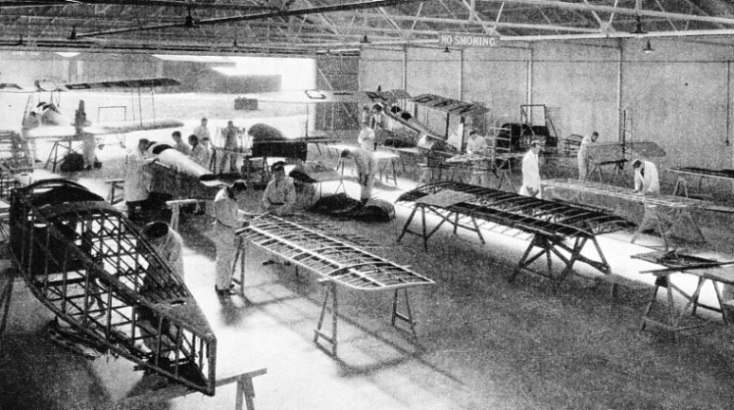 STUDENTS LEARNING WING AND FUSELAGE CONSTRUCTION at the Brooklands Aerodrome premises of the College  of Aeronautical Engineering. At Brooklands the students assemble complete aircraft and gain experience of working in aerodrome conditions. The theory and general practice of wood-working are also taught in the London workshops of this college. 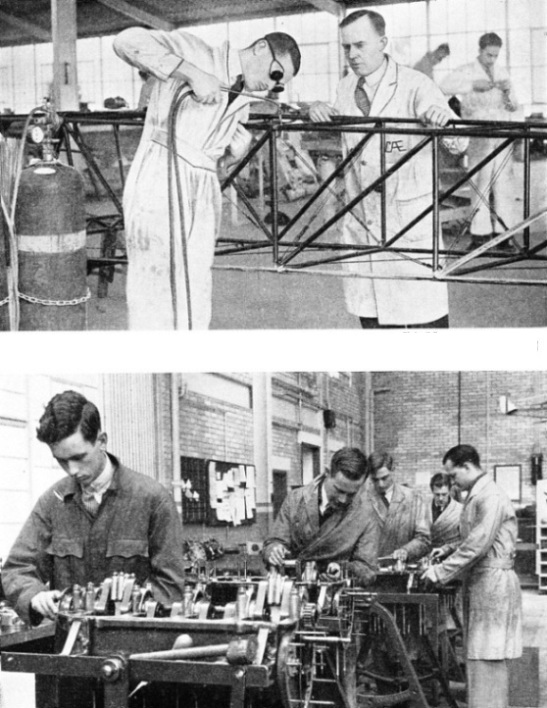 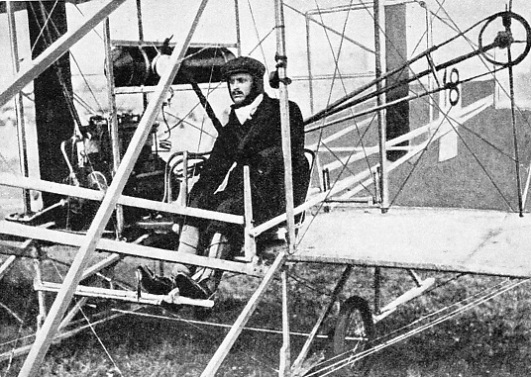 AT A FLYING MEETING IN 1910, at Bournemouth, Hampshire, the Hon. Charles Stewart Rolls was killed. When he was making landing tests, he brought his biplane down at a steep angle; a rear stabilizing plane broke away and became entangled in one of the propellers. This caused the aeroplane to crash from a height of 70 feet, and thus a brilliant career was brought to an untimely end. This photograph was taken shortly before the fatal flight.

The fighter is the fastest military aeroplane in existence. This type of aircraft fights not only with its guns, but also with its speed, climb and powers of manoeuvre. In selecting the pictures for the photogravure supplement, it was not forgotten how widespread was the hope that the art of flight should draw the nations together instead of enabling them to wage warfare in the air. Wonders of World Aviation is not politically concerned with such problems. Service machines are a part of the great story of aviation, and as such they take their rightful place in this work. Even those who deplore the situation that has given rise to rearmament in the air will agree that the design of fighter aircraft is a matter of great public concern. The basic principle of fighter design is that of speed. It has been said that too much emphasis is placed on speed in the air. Our contributor, Major Oliver Stewart, points out that there is not a pilot with experience of aerial fighting who would not prefer high speed to almost any other factor, including that of weight of armament. 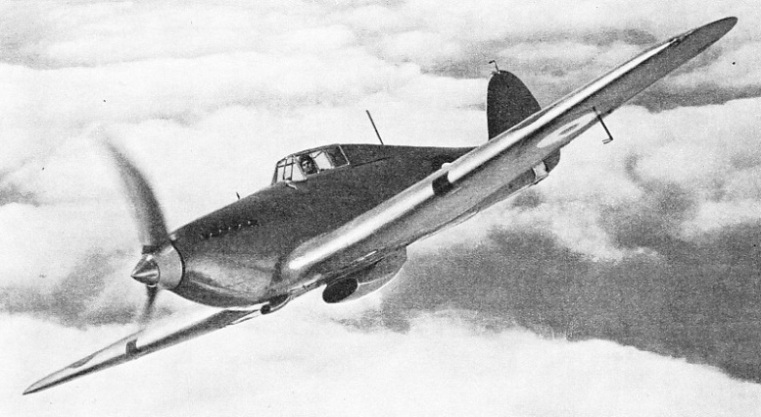 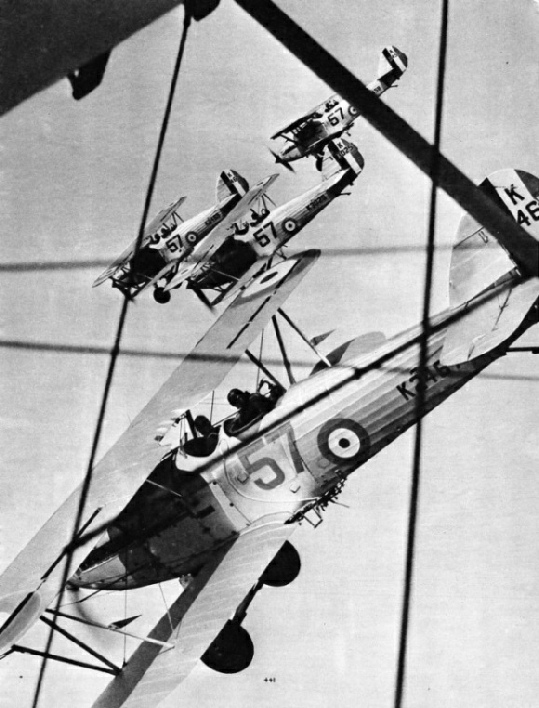 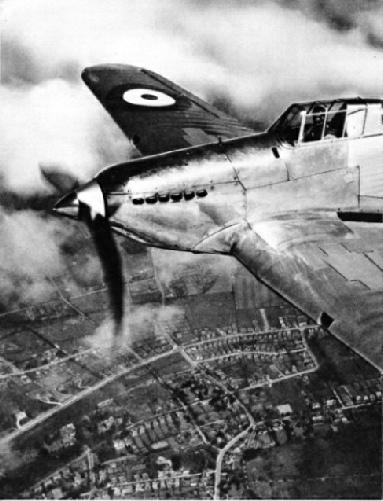 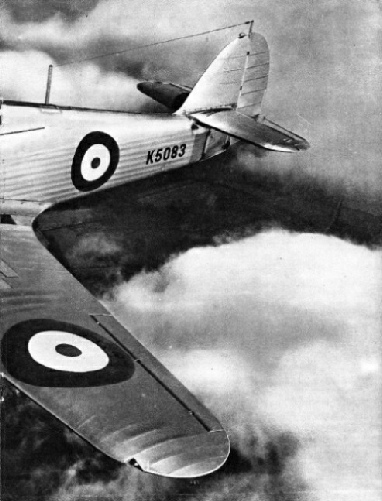 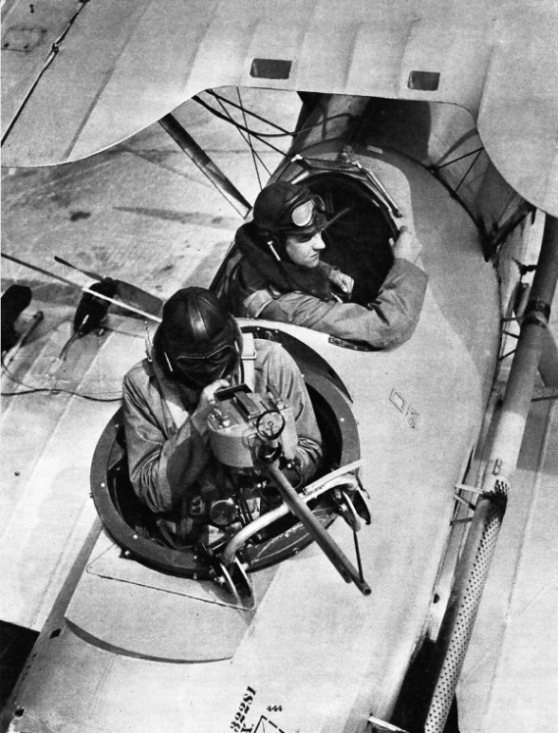 A MOVABLE GUN is a feature in which the two-seater fighter differs from the modern single-seater fighter. The single-seater fighter may have as many as six or eight guns, but they all fire in a fixed forward direction, the method of attack being to aim the machine itself. The gun being aimed in this picture is of the camera type which takes photographs to show the accuracy of the gunner’s aim. 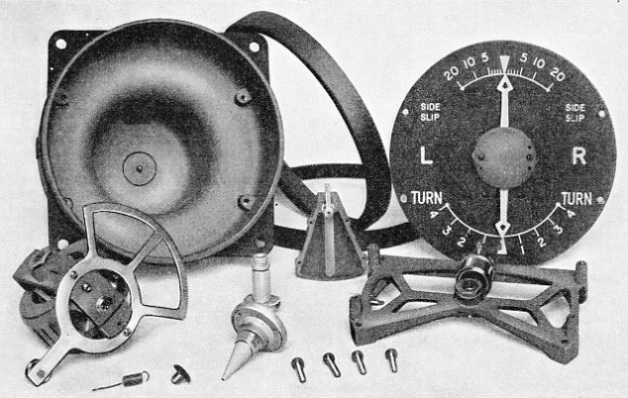 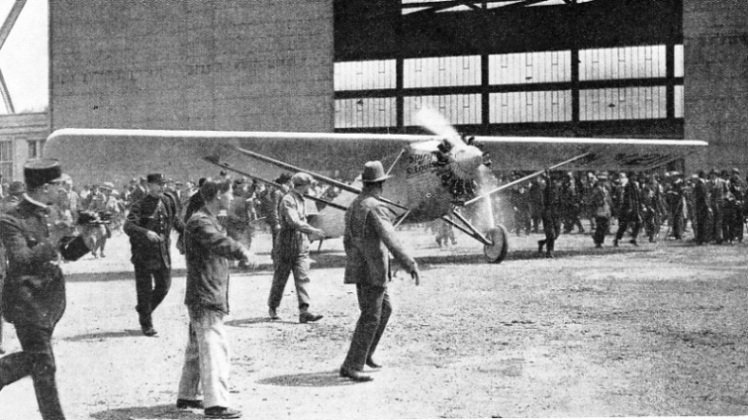