The cover this week shows a balloon barrage at the RAF station at Cardington, Bedfordshire. In time of war the balloons would be far higher than they appear in the cover illustration. 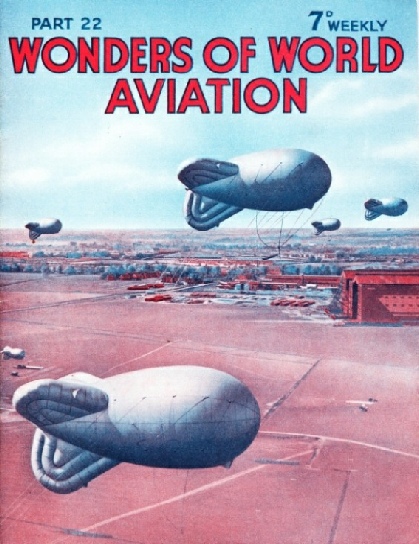 Representative of the name of Rolls Royce today are the Kestrel and Merlin types of engines, both of which are extensively used in high-performance service aircraft. This chapter, by L H Thomas, describes them both. This is the second article in the series on Modern Aero Engines.

“By air to anywhere at any moment”. Such is the service rendered by the British charter companies which operate air taxis. The work of the air taxi is fully described in this chapter by Sidney Howard. The article is concluded from part 21.

Swedish aviation has successfully overcome a variety of difficulties caused by the climate and nature of the country. British, German and Dutch manufacturers have provided the machines which Swedish pilots operate, sometimes in Arctic conditions. Swedish prestige is maintained by the men who pilot the ambulance machines which serve remote parts of the country, by the pilots who have flown into the Arctic to the aid of explorers in difficulties, and by the pilots of the Swedish Air Lines, or ABA. This chapter is by Sidney Howard and describes the steady progress made in Swedish aviation since 1909.

No matter what his profession or trade may be, anyone is eligible to join the Auxiliary Air Force, if, of course, he can pass the medical examination. In the City of London Squadron, for example, only a few of the airmen are normally occupied in mechanical work. As its name implies, this squadron draws its recruits from that quarter of London known as the City, and they come from banks, insurance, stockbroking and accountants’ offices.

Until recently only officers could become pilots in the Auxiliary Air Force, but now there are opportunities not only for men to be promoted to the rank of sergeant pilot, but also for men to enter the Auxiliary Air Force as sergeant pilots. No one, however, is taught to fly in the AAF. Before anyone can be accepted as a pilot he must have reached the standard of flying required for an “A” licence. But if he cannot learn to fly in the AAF, a young man can improve his flying in conditions which are better than those offered by a club. Flying is carried out during annual training, the two weeks in the summer when the squadron lives under canvas.

Only a limited number of those who join the AAF are able to fly; apart from the pilots, other ranks who can expect to do a reasonable amount of flying are photographers, gunners and observers. If the other work of the squadron is less spectacular, it is of equal

This chapter is a timely reminder of the unprecedented extension of the Royal Air Force. Sir Kingsley Wood, Secretary of State for Air, recently inaugurated a new appeal for recruits for the RAF. He announced requirements of an increase in personnel such as has never before been known in peacetime. Some 2,100 pilots, 550 observers, nearly 26,000 tradesmen and unskilled men, and about 3,000 boys are needed - all before the end of this year.

Sir Kingsley Wood said that the Royal Air Force is now engaged in the greatest expansion scheme that any defence Service has had to face in peace. “We are offering careers,” he continued, “in a Service vital to the country at a time when our strength means so much for the peace of the world. A great sustained effort will be required to achieve our object. But it can be said without doubt that in this country today there are no party differences in this connexion, and that the nation is united, as it has always been when a considerable effort was required.”

In 1911 the first official Post Office experiments in air mail took place. To commemorate the coronation of King George V, a temporary air mail service was established between Hendon and Windsor. From this experimental service has developed the great organization described in the chapter “Air Mails of the Empire” which begins on page 234. In this chapter Nigel Tangye describes the development of the Empire air mail routes to South Africa, India and Australia. The article is concluded in part 23.

The Control Tower at Basra Airport

CONTROL TOWER at Basra Airport, one of the finest aerodromes in the East and an important point on the England to India air mail route. The new airport buildings were opened on March 25, 1938. The Cairo to Basra section was the first to be inaugurated. That was in 1926; in 1929 the London-Cairo section was opened and the Cairo-Basra service extended to Karachi. Thus India was for the first time connected by a regular British air service with England.

THE PILOT’S CABIN on a Swedish Air Line’s Ju.52 Junkers aircraft. This machine, the Sodermanland, was one of a number brought into service in 1932. It seats fourteen passengers, and has three Pratt and Whitney Hornet engines, developing a total of 1,725 horse-power. The wings and fuselage of the machine are metal covered, the metal being corrugated to increase its strength.

AUXILIARY AIR FORCE MACHINES lined up on the aerodrome at Herndon. They are Hawker Harts of No. 601 Squadron of the AAF. This is the County of London Squadron, and was formerly a bomber squadron; it is now a fighter squadron. There are two other AAF units stationed at Hendon, the City of London and the County of Middlesex Squadrons.

COMPOSITE COOLING is a feature of the Rolls-Royce Kestrel engines. In level flight the engines are entirely water cooled. When climbing a slight amount of boiling is allowed for, thus permitting a smaller radiator to be sued than would otherwise be permissible. Reduction gearing for driving the propeller is provided, and a choice of three gear ratios is available.

Modern intensive cultivation has brought new problems to the agriculturalists, not least of which are the varieties of insect pests previously unknown. But although science has created difficulties for itself, it has at the same time provided powerful weapons against insect invaders. Among thee weapons, the aeroplane is becoming increasingly important. It strikes swiftly and surely and is proving of the utmost value where man was previously helpless. In this chapter, R. Quarendon describes the various ways aeroplanes drop poisonous powders which can rapidly overcome plagues which threaten crops and trees.

COTTON PLANTS are subject to attacks from the boll weevil. This insect is particularly active after heavy rainfall, and a delay, even of hours, in the application of calcium arsenate powder may cause thousands of pounds of damage to the crops. When aeroplanes are not available the work has to be carried out with carts, fifty to seventy-five of which are required to do the work of one aeroplane.

WHEN TWO PASSENGERS are to be carried in a chartered aeroplane, the Leopard Moth is a particularly suitable machine. This De Havilland high-wing monoplane accommodates the passengers side by side on a cross seat at the back of the cabin. The Leopard Moth is powered by a Gipsy-Major 130 horse-power engine which gives a cruising speed of 117 miles an hour.

DUTCH AND SWEDISH AIRCRAFT at Bromma Airport, Stockholm. Each of the Swedish routes connecting with foreign countries is flown in cooperation with the national air lines of the country concerned. This photograph was taken in 1937 at the inauguration of non-stop air lines from Stockholm to Berlin and to Amsterdam.

THE MAJORITY OF AIR ROUTES from Sweden to other European countries are via Copenhagen. Malmo and Stockholm have the tow most important aerodromes in Sweden. German and Dutch aircraft are used by Swedish Air Lines.

A DUTCH BUILT AIR LINER used by Swedish Air Lines. It is of the American Douglas DC-3 type built by Fokkers under licence. Although a number of light aircraft, including seaplanes, are built in Sweden, no large air liners are constructed in the country; this is the reason for the use of foreign aircraft by Swedish Air Lines. 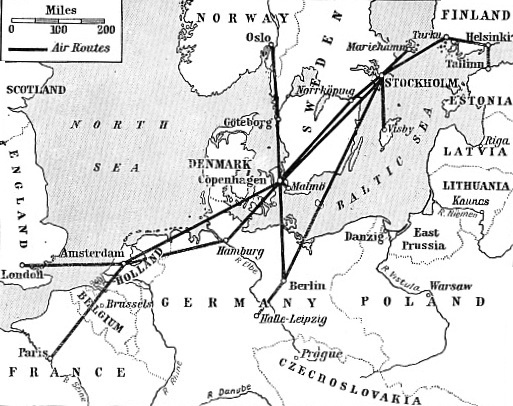 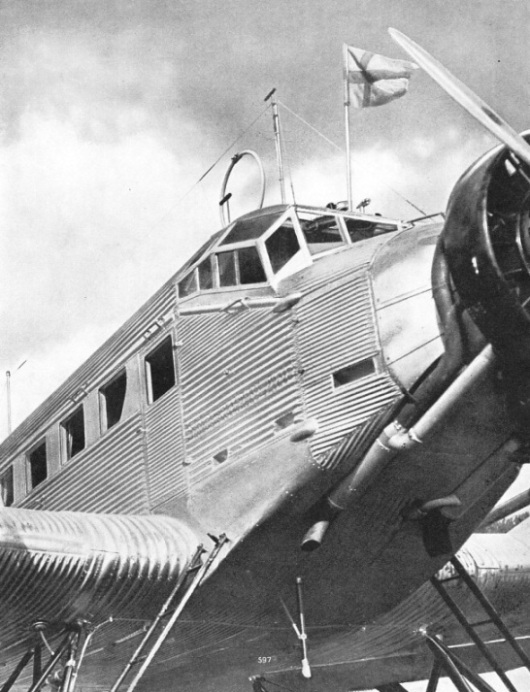 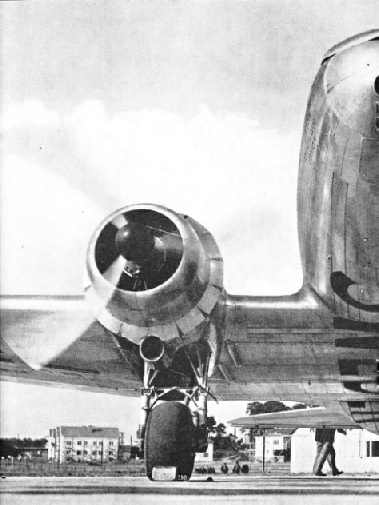 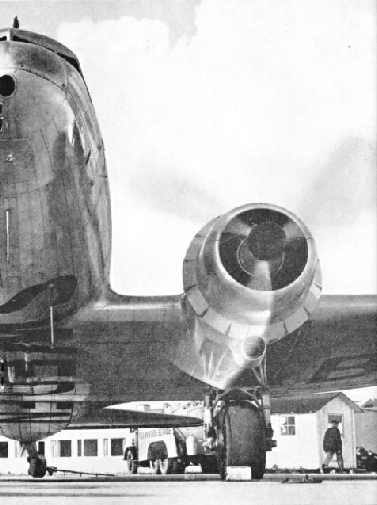 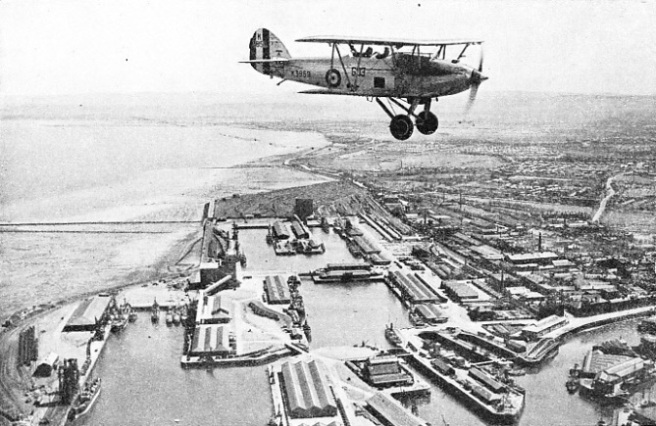 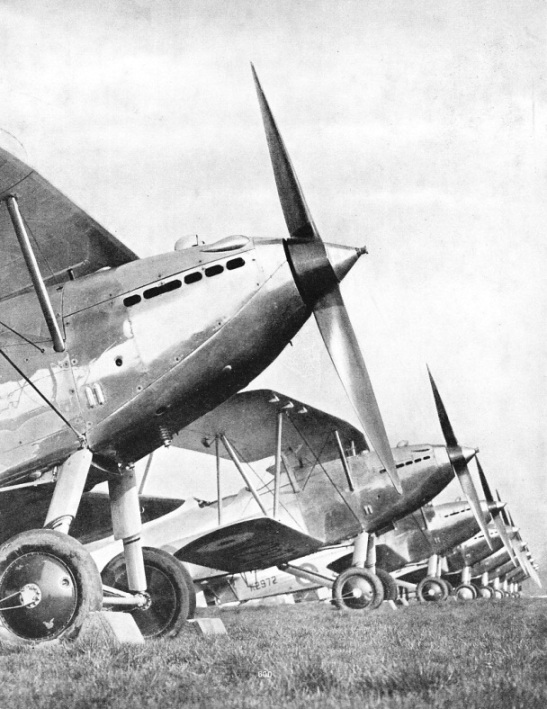 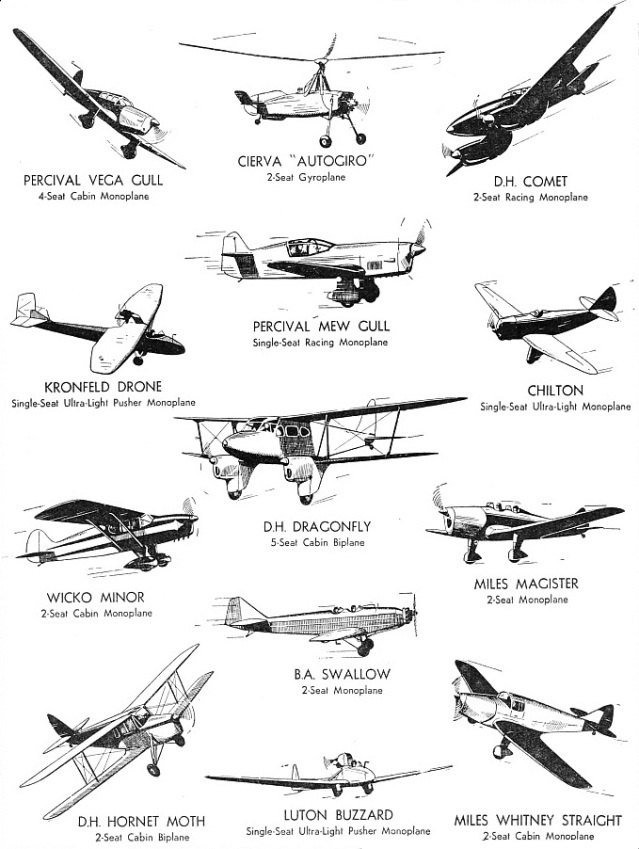