This week’s cover shows the Frobisher, first of a new class of De Havilland streamlined air liners for use on the London-Paris service. The Frobisher is a low-wing monoplane fitted with four Gipsy Twelve engines and has a cruising speed of 210 miles an hour. There is accommodation for twenty-two passengers. 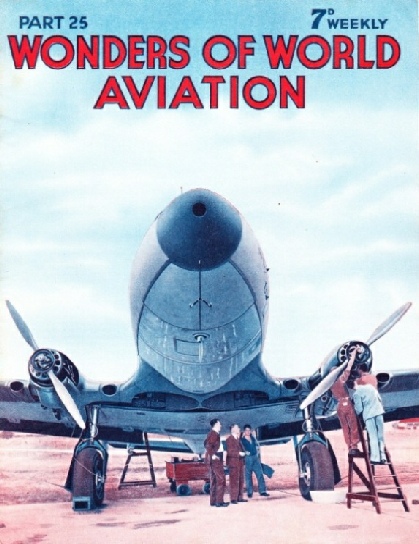 How Aircraft are Designed

The popular conception of an aeroplane designer is that he is a solitary worker, to whom there comes in an intuitive flash an idea which he embodies in a revolutionary invention. In these days no aeroplane is ever designed by one man single-handed. Every firm of constructors has a Chief Designer, but her is only the head of a large staff of designers. In this chapter, Marcus Langley describes the many month s of work by numerous specialists that are required to complete a new design.

How Aircraft are Designed

In this chapter, Sidney Howard, describes the various records of all kinds that have been made by Italian aviators throughout the history of aviation. The article is concluded from part 24.

The training aeroplanes of the war of 1914-18 may be divided into two classes. First, there were training aeroplanes that were used in vast numbers for instructional flying, but scarcely at all for any other purpose. Secondly, there were the advanced training types which were almost always those in use on active service at the particular period of the war. In this chapter, Captain Norman Macmillan describes the service types used for advanced instruction and the separate aeroplanes used for elementary tuition.

This is the third article in the series on Aeroplanes of the Great War.

BAGGAGE IS CARRIED IN THE NOSE of the Lockheed Electra. This compartment is over 30 cubic feet in capacity; some baggage can be carried in compartments in the wings. Controllable-pitch propellers are fitted, and the pitch of thee is partly altered automatically according to the throttle opening. On one engine the aircraft is able to climb to 5,800 feet with full load.

A THOROUGH INSPECTION of the airframe, engines, instruments, and controls is carried out on completion of each day’s flying, and every item is carefully examined in readiness for the next day’s work. Only after everything had been thoroughly checked is the daily flight certificate signed by the Inspector; without this certificate the machine cannot be flown on service again.

I have remarked before in these notes how much I regret the passing of such events as the Hendon Air Pageant and the Schneider Trophy. I am still of the opinion that the best way to encourage public interest in aviation is to give it a spectacular appeal. There are now many worthy schemes designed to make people “air minded”, but the pioneers of aviation knew their business when they held their Saturday afternoon exhibitions at Hendon and Shoreham and other aerodromes. Air races were common spectacles in those days and roused great public interest.

The immediate usefulness of these affairs may have been debatable, but we cannot disregard the lessons of the Schneider Trophy races - the last of the great international races to be held in Great Britain. In my opinion it was a bad thing for aviation when these races were stopped, if only because they did more to make the public air minded than many other subsequent schemes. But we know that the Schneider Trophy races contributed more than that to aviation. It is admitted now that the efficiency of the present RAF fighters is a direct result of the knowledge gained by designers from the Schneider races. The reason given for stopping the Schneider Trophy races was that they had served their purpose, and that all that could be learnt from them had been learnt.

I cannot follow this line of reasoning. If the lessons learnt from the Schneider Trophy were so invaluable - and we know now that they were - why have we not had similar contests since 1931? Why should the fighter of the future lack the knowledge which it is now admitted has done so much to make the present day fighter so efficient? That the Schneider Trophy races were so informative should dispose of the charge, so frequently made at the time, that such contests were of “no use”. In any event, this question of usefulness, this desire for immediate and direct results, is one with which I have little patience. It is a short-sighted policy to support something only for its immediate or direct value. There is the prestige, to which no one can assess a value. Then there is the future. The story of the conquest of nature is largely one of the apparent foolishness of man’s early attempts. All progress and all human endeavour have depended on the so-called foolishness or the pioneers.

To a Government this problem of usefulness and immediate and direct results is of some consequence, since a Government is the guardian of the public money. For this reason alone we cannot look to any Government to support spectacular flying on a large scale. Rightly or wrongly, it has never been the policy of a British Government to support spectacular flying to any great extent. There has, for one thing, been the excuse of public money; and that may be a perfectly reasonable excuse, although I believe that little real criticism would be raised if, for example, the Schneider Trophy races were held again.

It has almost invariably been private enterprise which has encouraged the spectacular side of flying. But for the generosity of the late Lady Houston, Great Britain would never have entered a single machine for the 1931 Schneider Trophy which, in that year, we won outright. I have already paid a tribute in these notes to Lord Northcliffe, whose prizes were of inestimable value to the development of aviation.

Lord Northcliffe did not stop to consider the usefulness of the races and contests for which he gave so many valuable prizes. A great showman (in the best meaning of that word) he knew that the world’s best aviators, encouraged by big money prize to make speed records, would attract the public. And he knew, too, that it was improbable that there would be any immediate results from these events. He offered a prize of £1,000 for the first aviator to fly the English Channel. He lived to see regular aeroplane services over that same stretch of water. He offered £10,000 for the aeroplane to fly the North Atlantic. That was in 1919; now, nearly twenty years later, plans are well ahead for a regular transatlantic service, which will one day be a reality, despite pessimistic opinions to the contrary.

If the day of the spectacular air races and contests is over, there are still many valuable trophies to be won by the modern flying man, and in this chapter T. Stanhope Sprigg tells the stories of some famous air trophies. The article is concluded in part 26.

TWICE HOLDER OF THE BRITANNIA TROPHY, which is awarded each year for the most meritorious performance in the air. Miss Jean Batten is standing beside her Percival Gull aircraft in which she won the trophy for 1935 for a solo flight across the South Atlantic. In 1936 she was awarded the trophy for her solo flight from England to New Zealand.

THE DURATION RECORD was broken in 1928 by the two Italian pilots Ferrarin and Major del Prete. They remained in the air for 58 hours 37 minutes, flying over a triangular course and covering a distance of about 5,000 miles. This photograph shows the machine, a Savoia-Marchetti S.64, when it landed at Monte Celio aerodrome after the completion of the flight.

THE HOME OF BRITISH AIRWAYS is at Heston Airport, Middlesex, an aerial view of the buildings of which is shown in this photograph. The operational staff, service department workshops and the instructional school are all housed at this aerodrome. The large hangar in the foreground now belongs to British Airways and houses the company’s fleet of aircraft. It has a floor area of 60,000 square feet and an unobstructed entrance 200 feet wide.

A knowledge of the atmospheric conditions which exist at varying altitudes is as necessary to the aeronautical engineer as it is to weather forecasters. The performance of an aeroplane is considerably affected by the temperature, humidity and density of the air through which it flies. In this chapter, G. V. Dowding describes how meteorologists use balloons to carry recording instruments several miles up into the atmosphere.

Training Machines of the Great War

A FORWARD ELEVATOR mounted on outriggers in front of the main planes distinguished the Maurice Farman Longhorn from the Shorthorn. This forward elevator operated in conjunction with the elevator mounted behind the tailplanes. Farman aircraft were flown by almost all the early RAF pilots, and were not superseded until 1917. The pupil occupied the front seat.

TWO SKIDS PROJECTED IN FRONT of the wings of the Farman Shorthorn although there was not forward elevator. These two skids formed part of the main frame of the undercarriage. Both types of the Farman were fitted with 70 horse-power Renault engines. The speed at ground level was 66 miles and hour; the flight duration was three and three-quarter hours.

CAPTIVE BALLOONS have been used to carry scientific instruments up into the fog at Kew Gardens, Surrey. The instruments measure such factors as temperature, wind currents and the height of the fog. Fog is one of the biggest difficulties in aerial navigation and the more the meteorologists are able to find out about its nature and formation, the more accurately are they able to forecast its occurrence.

THE FIRST FLIGHT TEST of any new aircraft is an anxious time for the Chief Designer. Sometimes the performance proves better than that expected, but almost invariably there are some small adjustments to make and further flights to do before the aircraft can be handed over to the customer for acceptance trials. This photograph shows a De Havilland Albatross type aircraft being brought out for flight trials.

Of the two subsidized air line companies in Great Britain, British Airways is the newer, the other being Imperial Airways. The rise of British Airways to its present important position has been rapid. It was formed by the amalgamation on October 1, 1935, of Hillman’s Airways, United Airways and Spartan Airlines. In August 1936 British Continental Airways was absorbed. British Airways is the only British company which operates regular night mail services. It is responsible for the only British service to Scandinavia.It non-stop service between London and Hamburg is the fastest flown at present. British Airways was the first British company to establish a blind-approach training school for its pilots and the first British company to use the Link trainer for the training of commercial pilots. In this chapter, Howard Warriner describes this great aircraft operating company.

AIR MAIL FOR SCANDINAVIA is carried by British Airways. For this the company receives a subsidy from the British Government. This subsidy was announced in February 1936, and was the first to be awarded to an independent air line. It was on this route that the first air mail left Great Britain by air without surcharge. Passengers also are carried to Scandinavia in the Lockheed Electra aircraft.

THE BRITISH AIRWAYS ROUTE TO BERLIN is for mail and freight; the route to Stockholm is for passengers, freight and mail; and the service to Paris is for passengers and for freight. British Airways have planned to run a South Atlantic service to South America via Lisbon and West Africa.

The development of the air-cooled radial engine in Great Britain is closely linked with the name of Bristol. In engine design the Bristol Aeroplane Company, Ltd, had concentrated exclusively on this type since 1920. The current series of nine-cylinder, single-bank radial engines made by the firm is a fitting testimony to the progress that has been made. In this chapter, L. H. Thomas describes the Bristol Pegasus and Mercury engines.

This is the third article in the series on Modern Aero Engines. 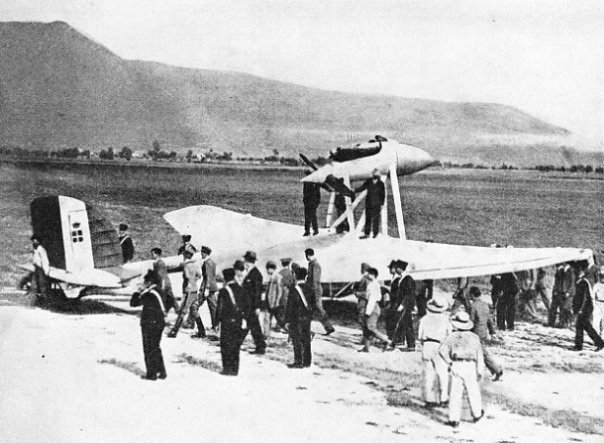 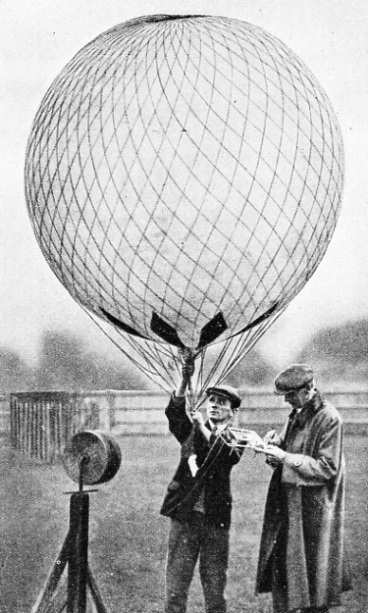 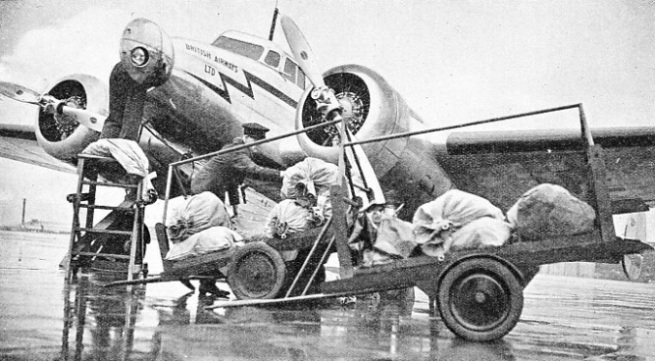 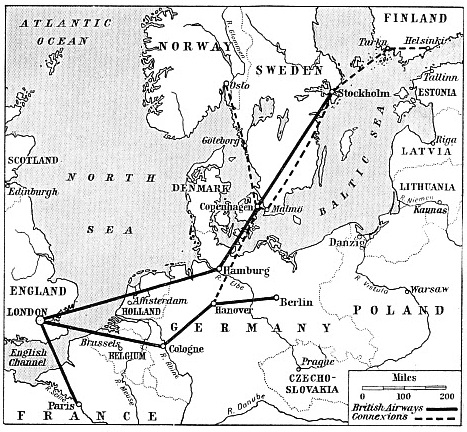 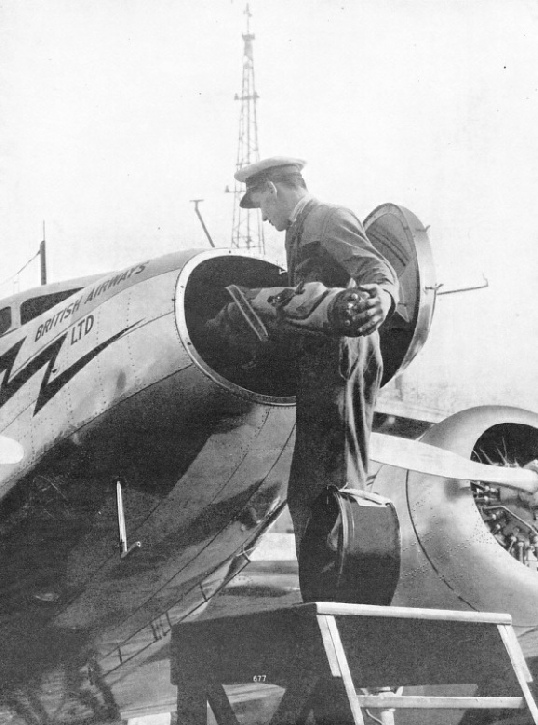 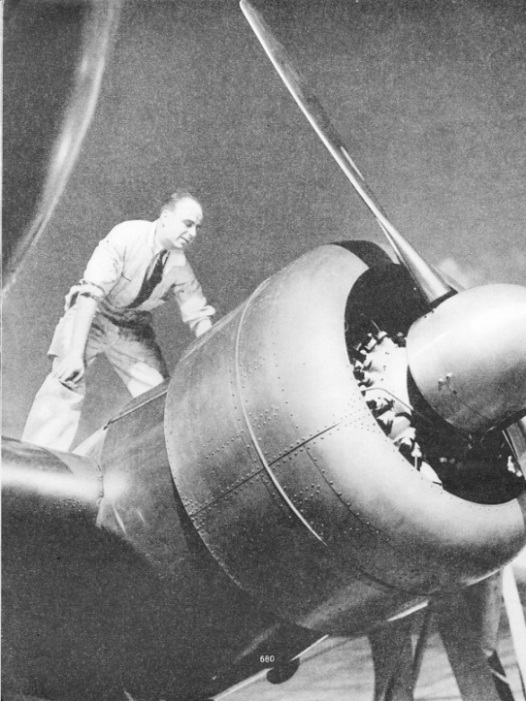 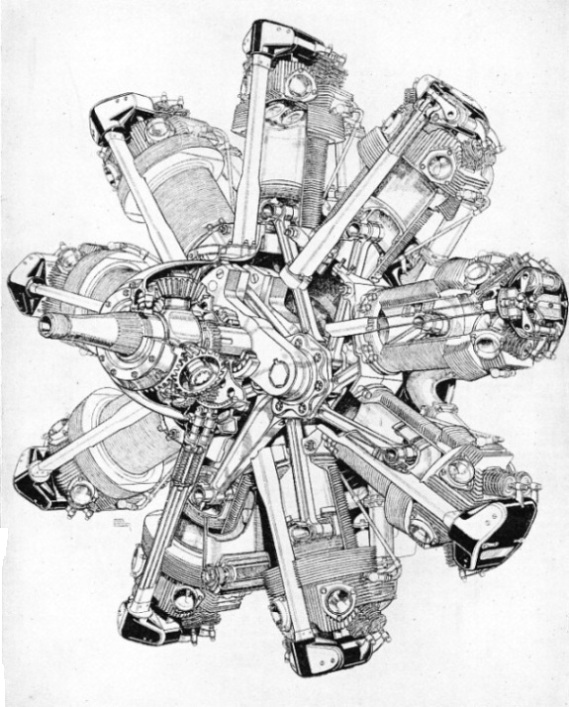 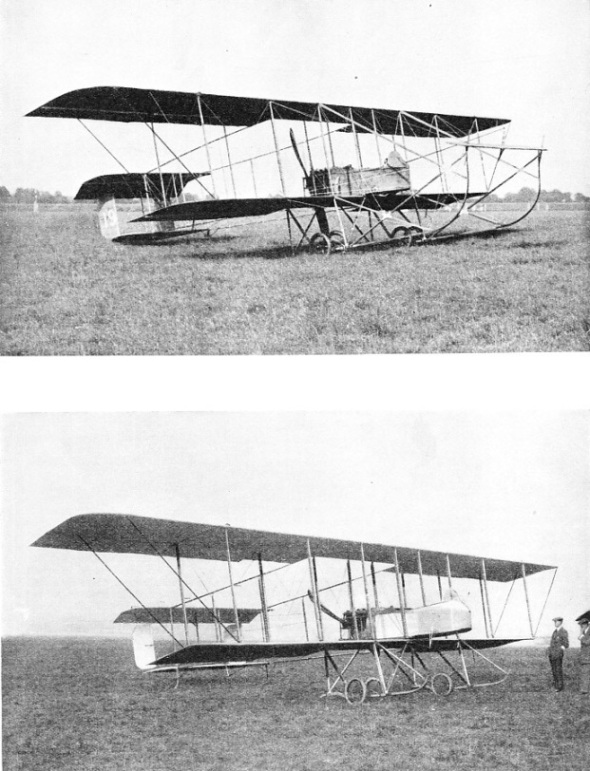 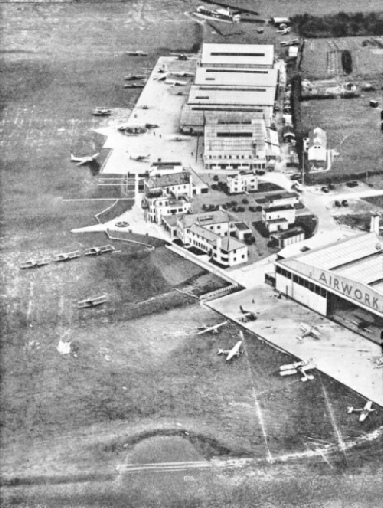 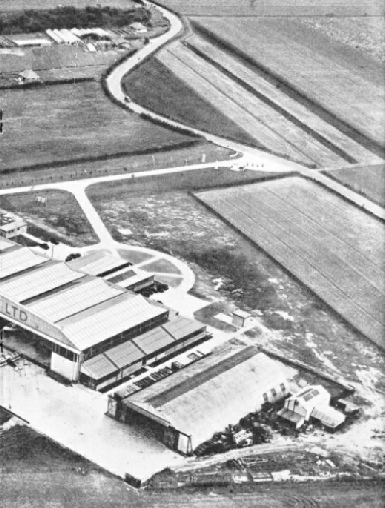