Our cover this week shows a Southampton class flying boat in the air over the Needles, Isle of Wight. The Supermarine Southampton Mark II is a twin-engined bombing and naval reconnaissance tractor biplane. The type originally had Napier Lion Series V engines; later, Rolls-Royce Kestrels were substituted. 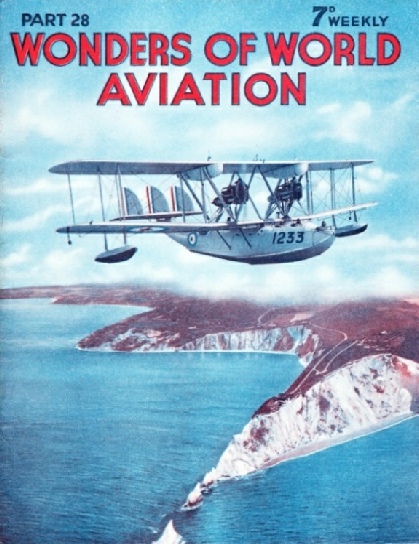 Development of the Bomber

The only bomb available for British aircraft in August 1914 was the 20-lb Hale. Bombs were not at first used by the RFC, whose pilots looked upon aeroplanes as flying scouts for the ground forces. Soon, however, the offensive properties of aeroplanes became apparent. In this chapter by Captain Norman Macmillan, the development of the bomber into large twin-engined types is fully described. This is the fifth article in the series Aeroplanes of the Great War.

Development of the Bomber

Training Boys in the RAF (Part 1)

The importance of the work done by the Royal Air Force overseas is not generally appreciated, but this chapter, which is by Peter Duff, gives some fascinating details of its wide scope and interest. This article is concluded from part 27.

Meteorology is daily becoming of greater importance to the air-line pilot and to the long-distance flier. Meteorology is a much more complicated subject for the aviator than is is for the navigator of surface transport. The navigator of a ship is concerned only with conditions at ground level. The navigator of an aeroplane requires to know the weather conditions at various heights as well as at surface level. Thus he is concerned with three-dimensional meteorology so that he may choose the best height at which to fly. In this chapter, Arthur Clark describes the principles of “solid” meteorology.

THE BOMB-AIMER’S POSITION can be seen forward between the two pilots’ seats in this photograph of a Saro London flying boat. To the right of the bomb-aimer’s position are the three rows of switches which release the bombs electrically. The bombs are carried underneath the lower wings between the hull and the wing floats.

METAL FUSELAGES are used for large and small aircraft. Fuselage structures for two Avro aeroplanes are shown in this photograph. In the foreground is a fuselage for a small two-seater,and behind it the fuselage for a three-engined commercial aircraft. All the joints between tubes and the various fittings, such as those for internal bracing wires, are fixed by welding.

The Evacuation of Wounded

THE EVACUATION OF WOUNDED can be accomplished with troop carriers, provision being made in these machines to accommodate stretchers. The stretchers are brought out of the aircraft through a small door in the nose. This photograph shows a casualty from the Waziristan operations in 1937 being taken out of an aeroplane at Rawalapindi, in the Punjab, India.

MAIN WORKSHOP of Saunders-Roe, Ltd, at Cowes. It is sufficiently large to take from ten to twelve flying boats in various stages of construction. The doorway has an opening 150 feet wide and 40 feet high. This doorway is closed by six steel-framed sliding doors, each weighing five tons but easily operated by one man by means of hand gearing.

Probably few of those who know the lovely stretches of the River Thames near Goring and Streatley have associated this part of the Thames Valley with aviation. Yet there is a real connexion between small a small boat-building business established at Streatley-on-Thames more than a century ago by Mr. M. Saunders, and the great aviation business of Saunders-Roe Ltd. We have already referred in this Work to the career of Sir Alliott Verdon-Roe, and this chapter, by Sidney Howard, describes Saro Aircraft. Saunders-Roe Ltd. has concentrated mainly, as might have been expected, on the design and construction of flying boats, including amphibian aircraft. One of the chief advantages of the amphibian over the flying boat is that it can alight on the water, taxi to the slipway, then lower its wheels and run up the slipway with the ease and simplicity of an ordinary landplane.

FOUR ENGINES WERE USED on the Handley Page V/1500 bomber which was ready at the time of the Armistice to carry out long-distance raids. Two of the propellers were of tractor type and two pusher. The span of the aircraft was 126 feet and its height 23 feet. It was fitted with four Rolls-Royce Eagle VIII engines and its speed was 99 miles an hour at 6,500 feet.

In recent years the use of welded joints in aircraft construction has increased greatly, and the art of welding now plays a major part in production. This chapter, by E. Dacre Lacy, deals with this aspect of aviation, and is a reminder that welding processes are used not only for the aeroplanes themselves, but also for making aircraft carriers and the hangars in which the aircraft are stored.

Training Boys in the RAF (Part 1)

There are two ways in which boys may join the Royal Air Force. The first is as apprentices and the second as boy entrants. In both classes a thorough training in a skilled trade is given. In this chapter, Arthur Clark describes the many opportunities for boys between 15 and 17¼ to be taught skilled trades in the RAF. The article is concluded in part 29.

STARTING THE ENGINE OF A HAWKER HART at Halton (Buckinghamshire), where many aircraft apprentices and boy entrants are trained. In this photograph an apprentice is shown turning the starting handle on the side of the nose of the aircraft. The removal of the covering from the wings makes visible the method of construction and assembly used for them.

A CREW OF FOUR were normally carried in the Handley Page twin-engined bombers. These aircraft were sometimes used to convey flying officers to the war zone. There were two types of this aircraft, the earlier 0/100 and the later 0/400. The o/400 was fitted with two 275 horse-power Rolls-Royce Falcon engines. The wings could be folded back parallel to the fuselage to economize in storage space. The speed of the 0/400 was 79 miles an hour at 6,500 feet when carrying sixteen 112-lb bombs. The flight duration of the aircraft was eight hours and the service ceiling 7,000 feet.

OF FRENCH DESIGN,  the Caudron Twin was a biplane with two 80 horse-power Le Rhone rotary engines or two 100 horse-power Anzani radial air-cooled engines. The speed was 82 miles an hour at 6,500 feet. The Caudron did not form the sole equipment of any British squadron. 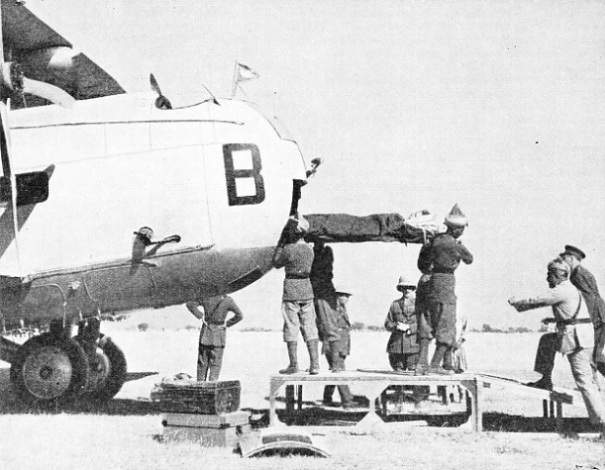 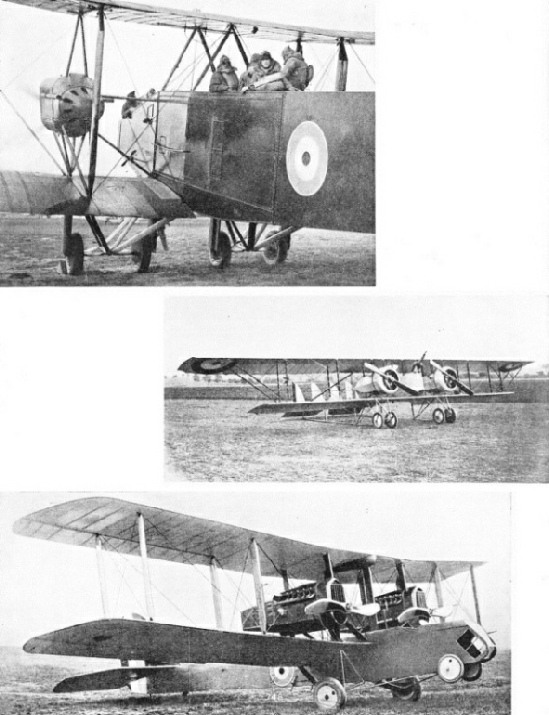 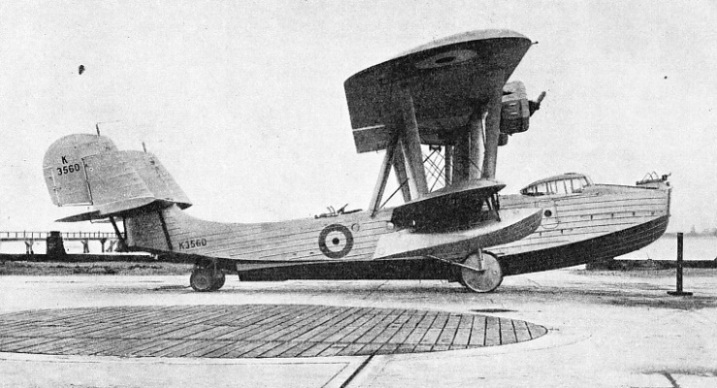 EXTENSIVELY USED BY THE RAF, the Saro London was designed as a general-purpose flying boat, and proved to be one of the most successful flying boat designs in the world. This photograph, taken at the manufacturers’ works at Cowes, Isle of Wight, shows in the foreground a turntable which is sued to assist in manoeuvring the flying boats on to the slipway for launching. 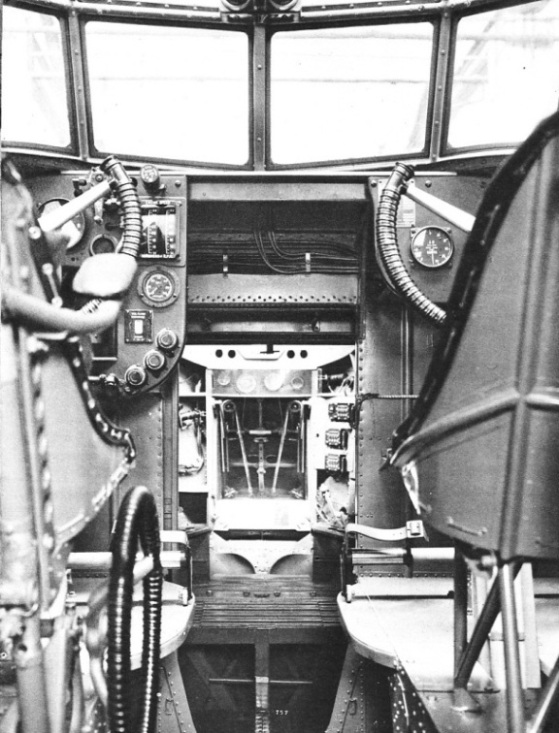 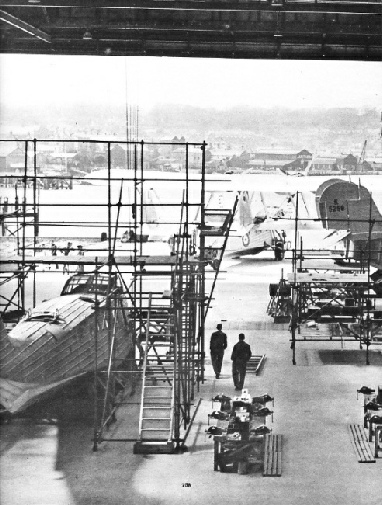 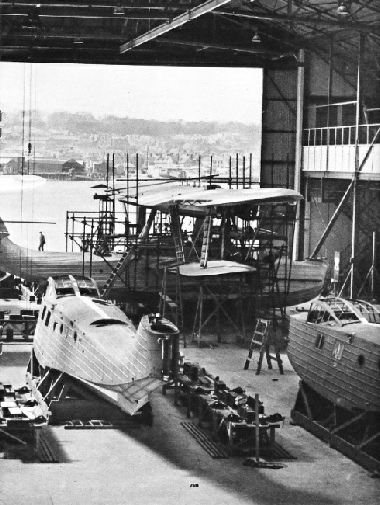 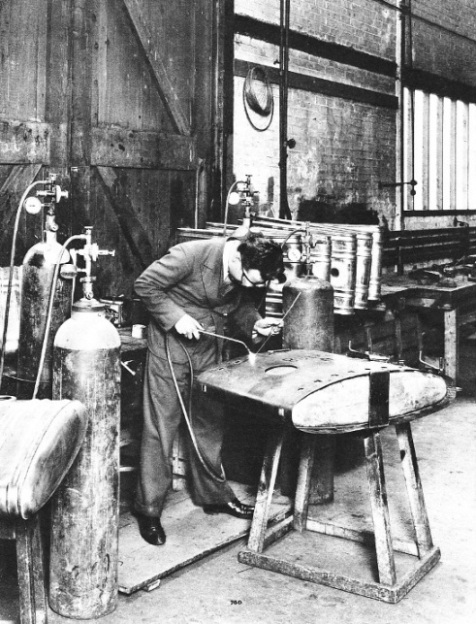 A PETROL TANK being built by welding the sections together. Before a welder is permitted to work on the construction of aircraft or their parts, he has to pass tests laid down by the Air Ministry. The test involve the making of different types of welded joints, all of which have to pass tensile tests, and one of which has to pass a microscopic test also. When a welder has passed these tests he is given a stamp with which to mark his work. 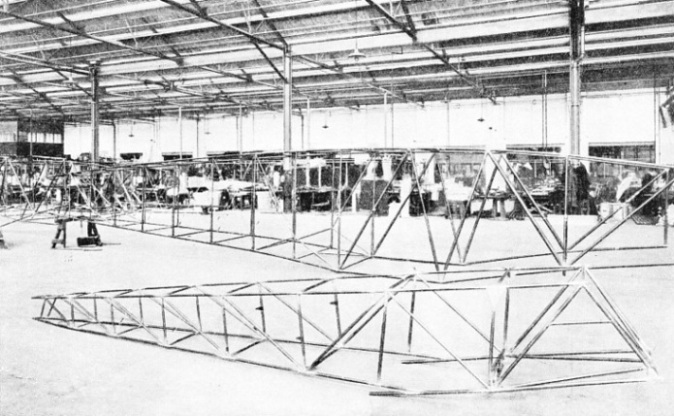 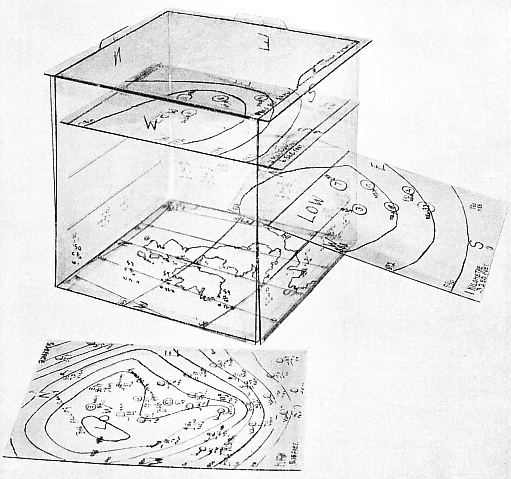 A TRANSPARENT CUBE is provided with three transparent shelves on which are drawn charts of the weather conditions at different heights. A map of the area covered by these charts is drawn on the bottom of the cube. When not in use, the shelves may be removed, as shown, and the device folded flat. 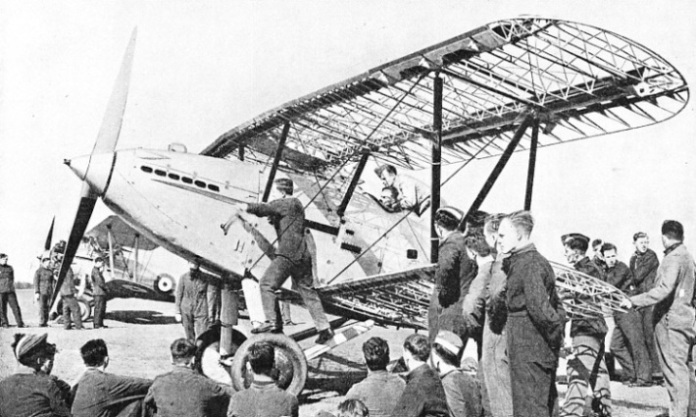