This week’s cover shows the British balloon Elsie, which took part in the Gordon Bennett Balloon Race in 1925. The Elsie crashed during the race, which was won by Belgium. Up to 1937 Great Britain, though a persistent competitor, had never won the Gordon Bennett Aeronautic Cup. The present cup is the third in the series. The first cup was won outright by Belgium, in 1922, 1923 and 1924. A similar run of victories - in 1926, 1927 and 1928 - gave the second cup to the United States. 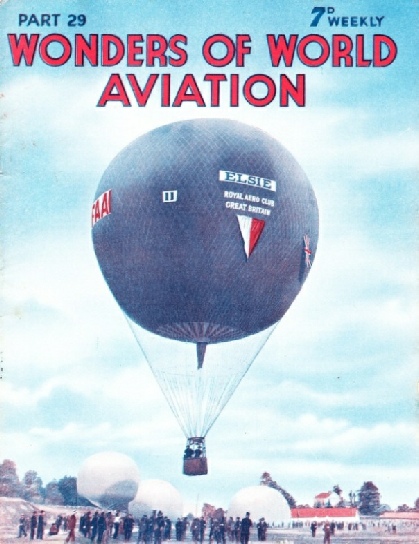 The Bristol Aeroplane Company Limited is the largest single aeronautical organization in the British Empire and was the first company to be formed exclusively for the production of aircraft in Great Britain. In 1910 the late Sir George White founded the British and Colonial Aeroplane Company, as it was then called. The Bristol Company boldly began the design and manufacture of aeroplanes on a large commercial scale, a policy which required faith in the future of aviation.

In this chapter Sidney Howard describes the development of this famous company.

Training Boys in the RAF (Part 2)

The Fight Against Fog

Pioneers of the Parachute (Part 1)

Training Boys in the RAF (Part 2)

In this chapter, Arthur Clark describes the many opportunities for boys between 15 and 17¼ to be taught skilled trades in the RAF. The article is concluded from part 28.

Few things at the moment are the subject of more argument, more discussion, more speculation and even ignorance than are the foreign air forces. Any discussion of some of them, such as that of Germany, for example, too frequently leads to the reopening of old wounds and arguments about treaties and the like, things with which we have no concern.

But our work would not live up to its title, Wonders of World Aviation, if we did not deal with the international air forces, and Major Oliver Stewart contributes this first of a series of chapters on the foreign air forces of the world. The first chapter deals with the German air force.

I have chosen Germany with which to begin this series because the German air force has become the measure by which the other air forces of the world, particularly those of Great Britain and France, are compared. Although Germany was prohibited, under the famous “Nine Rules” of the Peace Treaty, to build any military aircraft, there was, nevertheless, much speculation about her air fleet. For two years after Germany left the League of Nations, which she did in 1933, there were persistent rumours that she was building up a powerful air fleet of military aeroplanes. No one knew what was happening, apparently, but everyone seemed to expect the event, and thus few people could have been surprised when General Goering, in 1935, announced that Germany had a fully-equipped air force. When this announcement was made it is improbable that Germany’s air strength amounted to more than 300 first-line aeroplanes, but with remarkable and characteristic efficiency and swiftness Germany had in three years increased the number of her first-line aeroplanes to a figure which some observers have given as 3,000.

In this authoritative chapter Major Stewart discusses this expansion and deals with the aeroplanes that have made and are making Germany’s air force one of the finest in the world. Subsequent chapters will deal with the air services of other leading countries. The second chapter will deal with the French air force. The Armee de l'Air has been completely reorganised since the French Air Ministry was created in 1928, and the French aircraft industry has been nationalized.

Experimental Apparatus for the Dissipation of Fog

EXPERIMENTAL APPARATUS for the dissipation of fog by means of chemicals. Calcium chloride has a marked affinity for moisture, and fog has been successfully removed over considerable areas by spraying a strong solution of this chemical into the air. A portable type of apparatus working on this principle has been developed that can be placed out of the way alongside the runway.

ONE OF THE FIRST CLIPPERS to operate on the transpacific service of Pan American Airways was the China Clipper. This type of aircraft is known as the Martin 130. The four two-row fourteeen-cylinder Pratt and Whitney radial engines were of the Wasp type developing 830 horse-power each.

The Fairey Battle is one of the new types of monoplane medium bombers which are in large scale production for the Royal Air Force. In this chapter, J. Laurence Pritchard describes this monoplane which is designed to give maximum performance at considerable heights.

This is the second article in the series on Famous Aircraft.

The Fight Against Fog

If any experienced pilot were asked to say the thing he feared most the answer would almost certainly be fog. The fog menace becomes more and more serious with the increase in air traffic, and commercial aviation will be considerably handicapped if a solution to this problem is not found. So seriously is this menace regarded that the Aeronautical Research Committee of the Air Ministry has made arrangements at a number of airports for an extensive series of large-scale tests on fog dispersal. In this chapter, R. Quarendon describes in detail the difficulties prsented by the different kinds of fog (there are said to be fifteen different types) and that methods that are being evolved to fight them.

Pioneers of the Parachute (Part 1)

When aviation began to develop, a few men applied themselves to the solution of the problem of descending by parachute from an aeroplane in flight - a far different proposition from jumping from a free balloon. In this chapter, Sidney Howard describes the different technique needed when parachuting from aeroplanes and some of the pioneering parachutists. The article is concluded in part 30.

A RECORD DELAYED DROP by parachute was made in March 1938 by a Frenchman, James Williams. He dropped 34,000 feet before opening his parachute. This photograph shows him in the aeroplane before he took off; he was wearing an oxygen-fed mask to assist his breathing at the great height attained. Williams wore two parachutes as a safeguard against one not opening.

PRODUCED IN 1927, the Bristol Bulldog had a top speed of 178 miles an hour and a climb to 10,000 feet in five minutes. This performance was greatly increased with each successive medications of the type. The Bristol Bulldog was adopted as standard by several foreign countries as well as by the Royal Air Force.

A RETRACTABLE UNDERCARRIAGE is fitted to the Fairey Battle and the cockpits have sliding covers. In addition to bombs, there are two machine guns, operated by the pilot and Lewis gunner. The engine is a Rolls-Royce Merlin I, giving 950-990 horse-power.

LAUNCH OF AMERICA’S LARGEST AEROPLANE, the new Boeing 314 clipper. The cradle on which the flying boat was run down into the water weighed fifteen tons and was provided with floatation tanks to bring it to the surface of the water. During flight the four engines are accessible through passageways in the wings.

NEW FIGHTER-BOMBER AEROPLANE in use by the German air force. The aircraft is a Junkers Ju.87, with provision for a crew of two. Two guns are fitted and the aeroplane is capable of carrying a bomb load up to about 1,000 lb. The engine is a Junkers Jumo 210 of over 600 horse-power. The Jumo 210 is a twelve-cylinder inverted V liquid-cooled petrol engine.

MANY FLOAT SEAPLANES are in use by the fleet air arm of the German service, although the activities of the fleet section of the German air force are not great. Two aircraft carriers are under construction, but vessels of this nature have not yet been used in service. This photograph shows an officer giving instructions before a practice flight to pilots of float seaplanes. These aircraft are normally stationed on the coasts of the North and Baltic Seas.

A SEAPLANE FLOAT BEING RE-COVERED by apprentices at Halton. The bulkheads and cross members of the float are fitted into a jig which holds them in their correct positions during the covering process, and thus ensures that the finished float will be true. This provides an illustration of the type of work taught to apprentices who are to be airframe fitters. 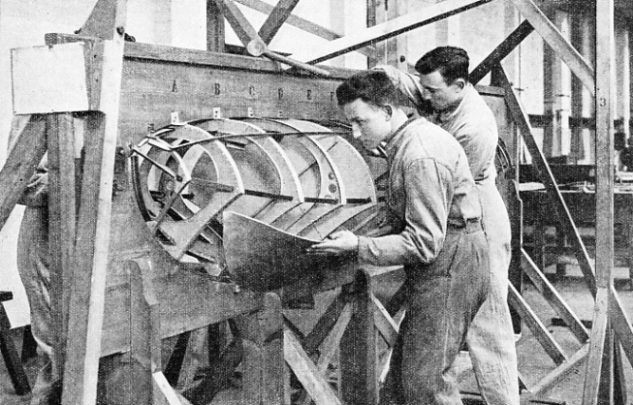 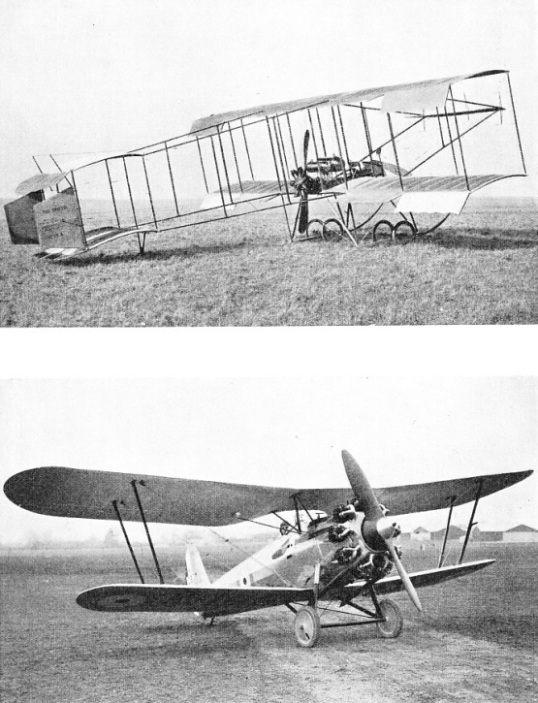 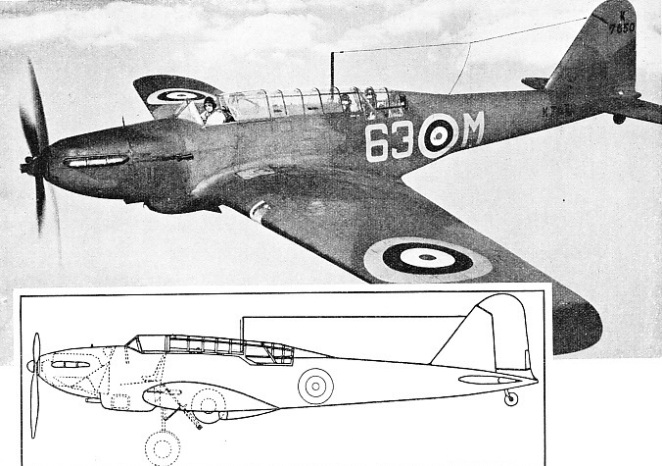 The Pan American Airways system, often referred to as the PAA, operates, in conjunction with its associated companies, more than 53,000 miles of air routes on regular schedules. It serves forty-seven countries. The system includes 204 airports and 143 private weather and radio stations. Up to June 1, 1938, figures showed that the company had carried 997,443 passengers; the total passenger-mileage was 364,421,048. The air company carries a high percentage of air mail and freight, known in America as “express”. In this chapter, E. Burnand Mount describes the vast American system that is Pan American Airways. 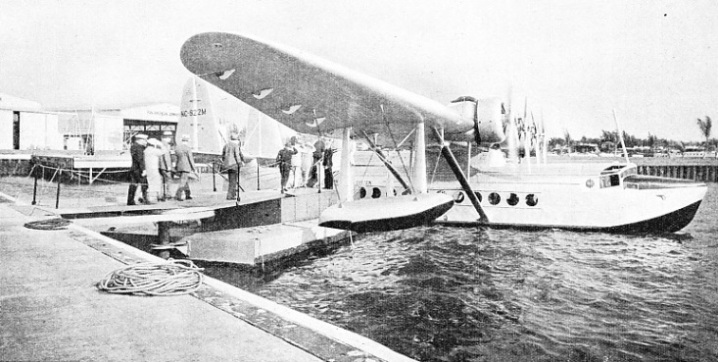 “CLIPPER” IS A GENERAL TERM applied by Pan American Airways to all their flying boats. Many types of flying boats are used, including aircraft of Sikorsky, Martin and Boeing makes. Passengers are shown boarding a Sikorsky S-42A flying boat in this photograph. The Sikorsky S-42A can accommodate thirty-two passengers during day flying, and has sleeping berths for fourteen passengers.

ALL THE MILEAGE of the Pan American Airways system is outside the boundaries of the United States, except for the short stretch between Los Angeles and the Mexican border. The short route from New York to Bermuda is flown in four hours and three-quarters; by fast steamer this journey takes two days. 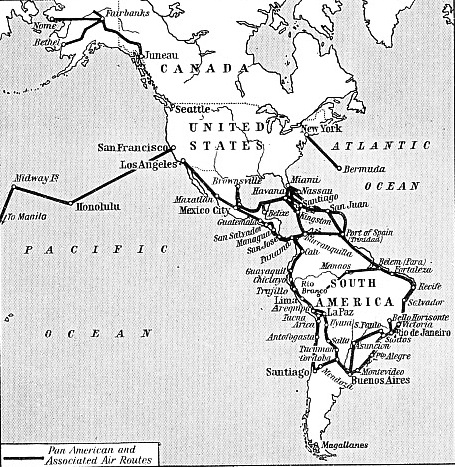 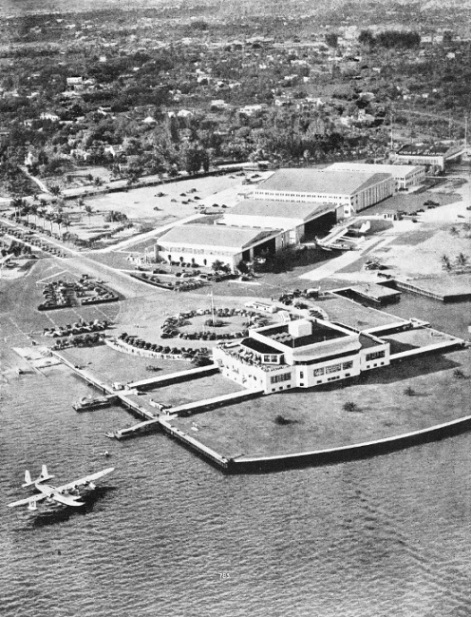 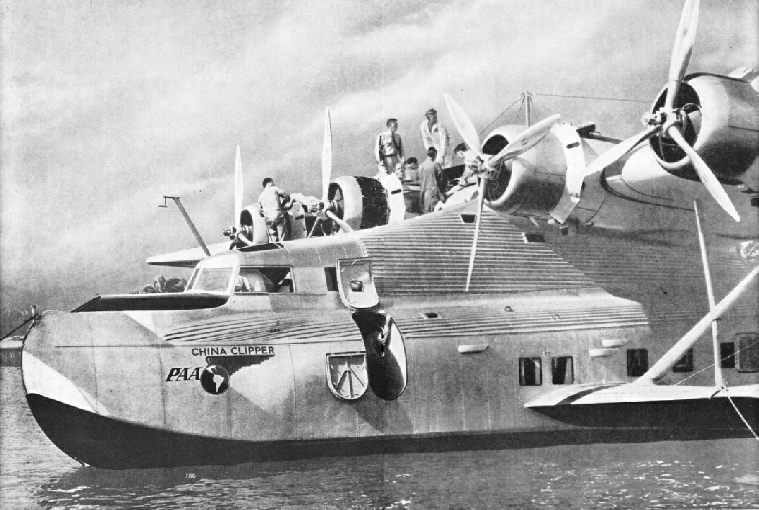 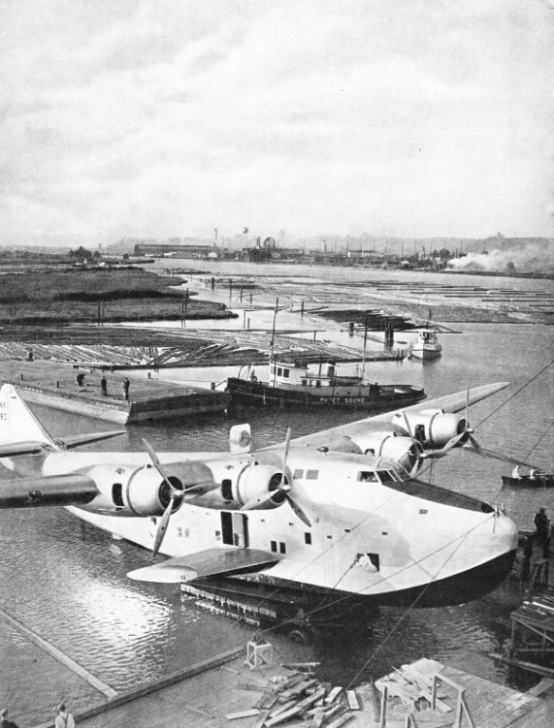 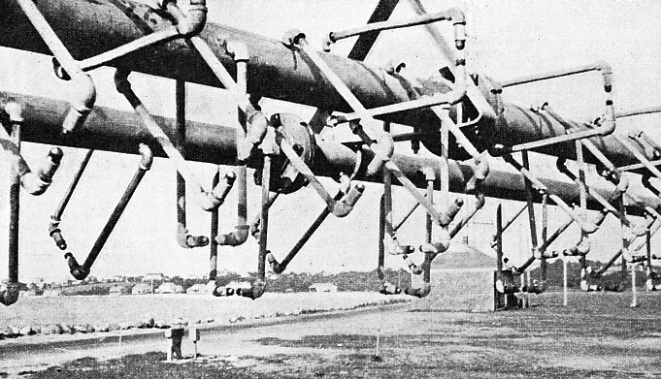 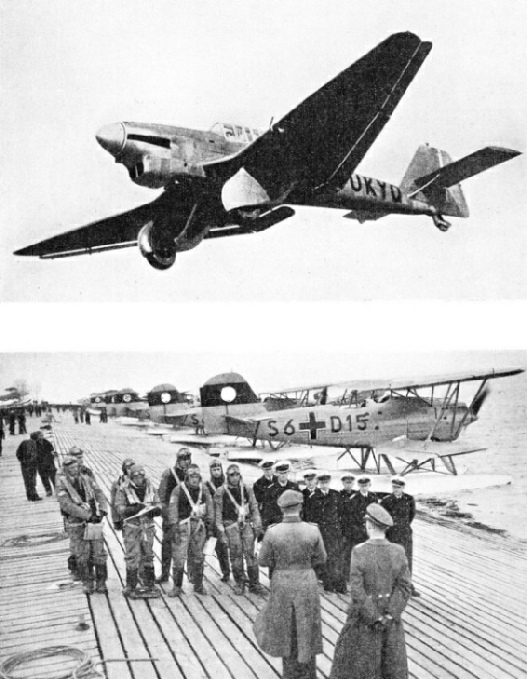 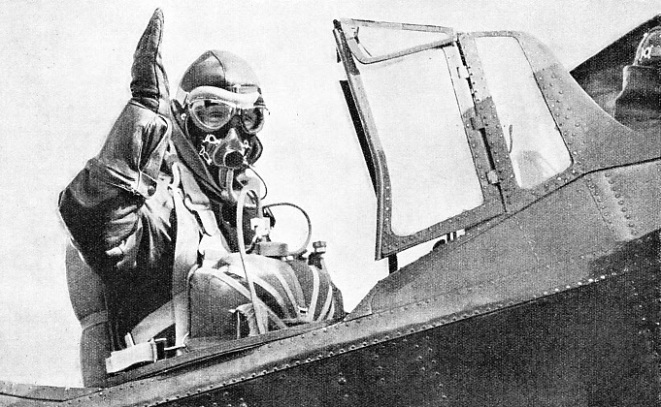