This part included a central photogravure supplement showing various aspects of aerial photography. It illustrates the article on Air Photography.

The cover illustration this week shows the aerodrome at Shoreham-by-Sea, Sussex.

Shoreham is now an official airport with customs offices. It serves the towns of Brighton and Worthing. It may also be classed as one of the pioneer British aerodromes, ranking next to Hendon and Brooklands. 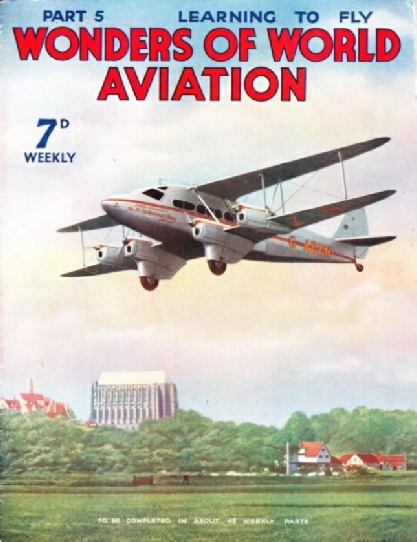 Conquest of the North Atlantic (Part 2)

Instruction in the Air

The First to Australia (Part 1)

How difficult aeronautical problems are solved by nature. Bird flight is not without its fascination to anyone interested in aeronautics. This chapter is by J L Nayler who has made a very close study of this subject and writes with considerable authority.

Instruction in the Air

Climbing, gliding and turning an aeroplane.

Arthur Clark’s first chapter on learning to fly proved to be a very popular one with all classes of readers. It brought many inquiries of many kinds and the letters indicated how widespread is the desire to learn to fly, not only among the more youthful readers but also among those of maturer years. The question of age was raised by several readers who seemed to think that

flying is necessarily a young man’s game, whereas it is more a matter of temperament than of years. There are some people who could never handle an aeroplane satisfactorily, no matter how many or few their years; there are others who by some instinct take naturally to the air regardless of whether they are sixteen or sixty. There is an inborn talent for flying as for driving a motor car or handling a horse, and how much of that talent you have can be decided only by taking lessons.

Instructing, too, calls for a special instinct, as any pilot knows who has learned under more than one instructor. Age in either class has never seemed to me to be of any importance; indeed, there is too much dwelling upon age in all walks of life, very often to the jeopardy of the development and use of talent and ability. “Young or old, it does not matter, so long as a man can do his act well” - that is a quotation that might be oftener remembered.

One of my fellow club members, who is now nearer sixty than fifty, learned to fly during his holiday last summer, and is now a quite competent private pilot who spends most of his week ends visiting by air. He has never made a bad landing, and this year proposes to spend his holiday flying himself about Europe.

Arthur Clark, who is himself a pilot, contributes this second chapter on the art of flying, and he will develop his subject in chapters to appear in succeeding Parts.

This is the second article in the series Learning to Fly.

HOW AIR SURVEY PHOTOGRAPHS OVERLAP ONE ANOTHER both in the direction of flight of the aeroplane and laterally where the lines of photographs join. The arrows indicate the path of the aeroplane. A signal light warns the pilot to steady the aircraft two seconds before each exposure is made.

THE EMPIRE STATE BUILDING, NEW YORK CITY. This picture provides a vivid illustration of the rectangular-block system on which New York is planned, and shows the way in which the high buildings cut off the sunlight from many of the streets. The Empire State Building is 1,250 feet high.

MODERN AND OLD ROADS intersect at the roundabout near Haydock, Lancashire. The broad road is the Liverpool-East Lancashire Road, A 580, and the tree-lined road is an old Roman Road. An interesting feature is the farmer’s tunnel under the new road, with the well-worn cattle tracks leading to it.

The Downward and Backward Movement of the Wings of a Gull

THE DOWNWARD AND BACKWARD MOVEMENT OF THE WINGS gives flying power to the gull, and to all other birds. The downward stroke raises the bird and the backward movement provides forward speed. During the upward stroke the wings are partly folded and the feathers are opened. The tie for a down beat is half as long again as the time for an up beat.

The First to Australia (Part 1)

London to Port Darwin in twenty-eight days in an open-cockpit machine. This chapter tells the story of the first flight to Australia. Among the aviators who were attracted by the flight of over 11,000 miles and by the £10,000 prize offered by the Australian Government for the first Australians to fly from England to the Commonwealth in under thirty days were two brothers, Ross Smith and Keith Smith. The chapter is written by H G Castle, and is concluded in part 6.

This is the fourth article in the series Great Flights.

VICKERS VIMY BIPLANE in which Alcock and Brown made their historic flight. They flew from St John’s, Newfoundland, to Clifden, Co. Galway, Ireland, a distance of 1,960 miles, in fifteen hours fifty-seen minutes - at an average speed of more than 120 miles an hour. The aeroplane was powered by two Rolls-Royce Eagle engines, each of 360 horse-power. The Vickers Vimy was a large aeroplane, with an overall length of 42 ft 8 in and its height of 15 feet. The estimated range was some 2,440 miles.

A reclaimed swamp that was made into a great aerodrome. The geographical position of Singapore makes the island extremely important as a junction in the world’s airway system. One of the finest airports in the world was opened at the city of Singapore on June 12, 1937. The building of the airport was a well-planned work of engineering. This chapter is by L H Thomas.

The Official Opening of the Singapore Airport

THE FLY PAST AT THE OFFICIAL OPENING of the Singapore airport on June 12, 1937. In the foreground is part of the concrete “apron”, with one of the curved taxying strips running away towards the water in the background. This water includes the seaplane channel and anchorage.

THE TIGER MOTH, a two-seater light training aircraft made by the De Havilland Aircraft Company, Ltd. When a machine is left standing in the open its nose is turned to face the wind. If the wind is strong, chocks may be placed behind the wheels - as in the above photograph - to prevent the wind from moving the machine backwards.

Conquest of the North Atlantic (Part 2)

The story of the first non-stop flight from the New World to Europe, by the late Sir John Alcock and Sir Arthur Whitten Brown. Through fog and sleet, they flew 1,960 miles to make the first direct, non-stop flight across the North Atlantic. This chapter is by H G Castle, and is concluded from part 4. This is the third article in the series Great Flights.

Vickers Vimy Aeroplane in Which Ross Smith and Keith Smith Won the £10,000 Prize

VICKERS VIMY AEROPLANE in which Ross Smith and his brother, Keith, won the £10,000 prize offered by the Australian Government for the first Australians to fly from England to the Commonwealth in under thirty days. The machine was similar to that in which Alcock and Brown had made the first crossing of the North Atlantic, and had been designed during the war of 1914-1918 as a heavy bomber. 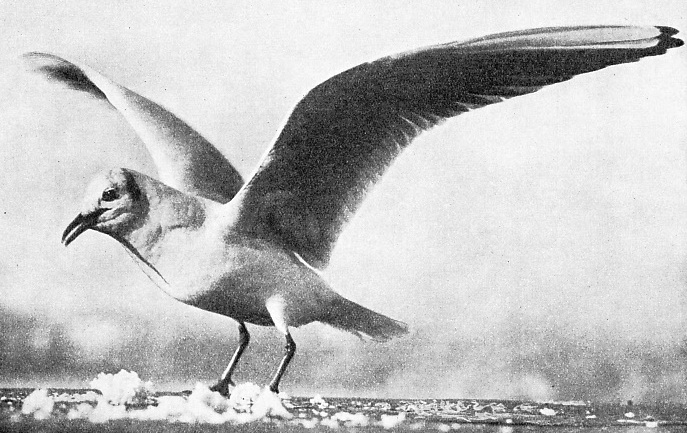 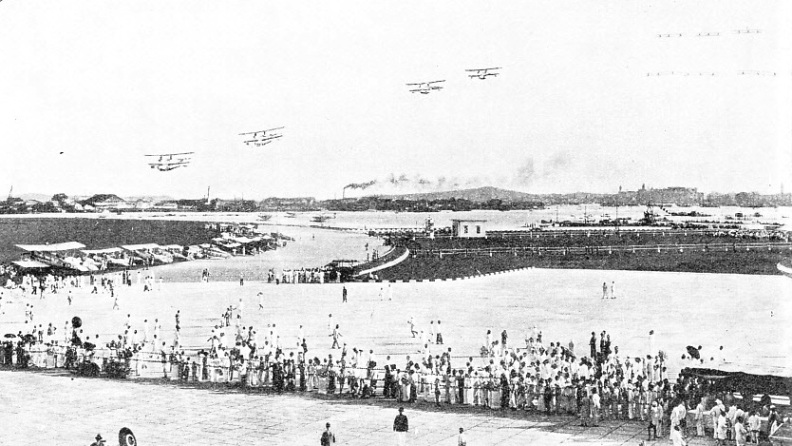 Rapid preparation of detailed maps and plans with the help of aircraft. Air photography has become an important science chiefly because there is everywhere an unceasing demand for maps. Photography has been called upon to lend its aid in mapping. It is only since the advent of the modern aeroplane that photography has played any considerable part in map compilation. This chapter is by Squadron Leader P R Burchall, and includes a photogravure supplement. It is the first article in the series on Air Photography. 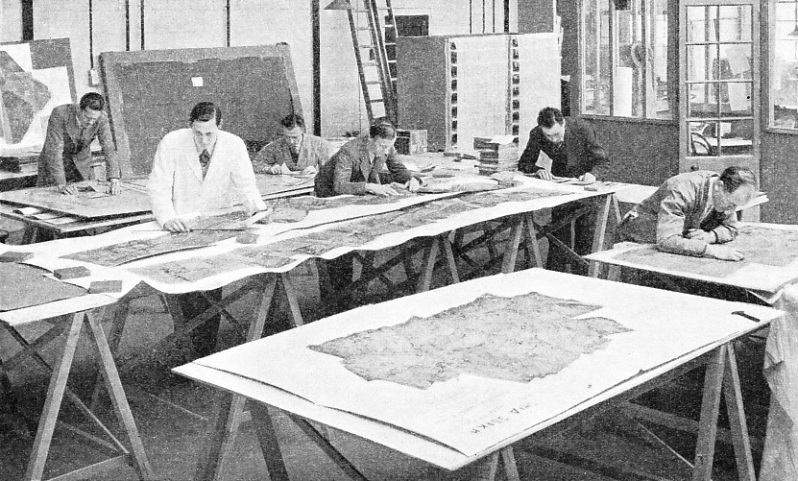 The Production of “Mosaics”

THE PRODUCTION OF “MOSAICS”, which consist of a number of related air photographs of the ground. The photographs are all to the same scale and are joined together on a support of plywood or stout linen. These “mosaics” are invaluable for obtaining a general view of all the details of a locality. 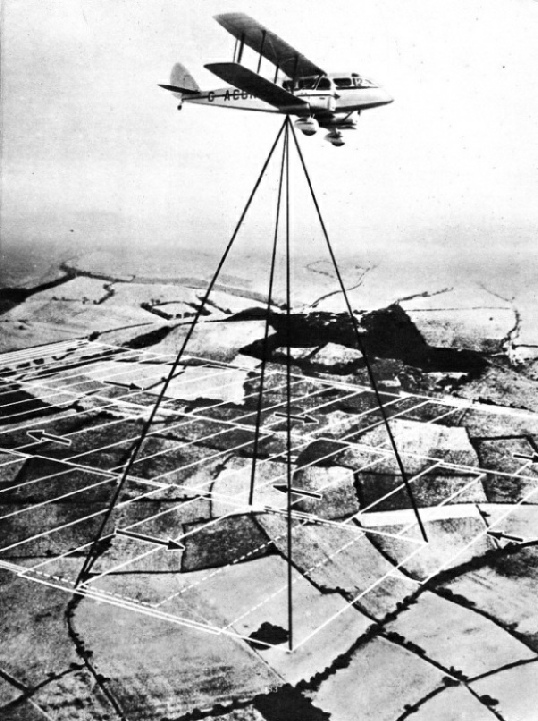 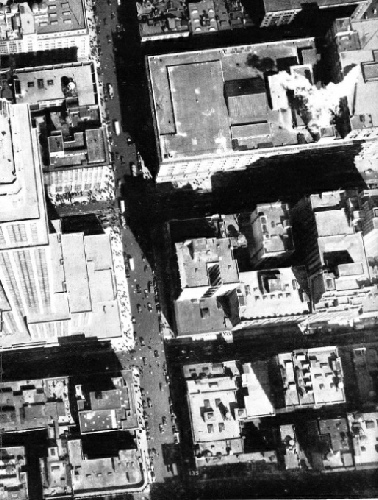 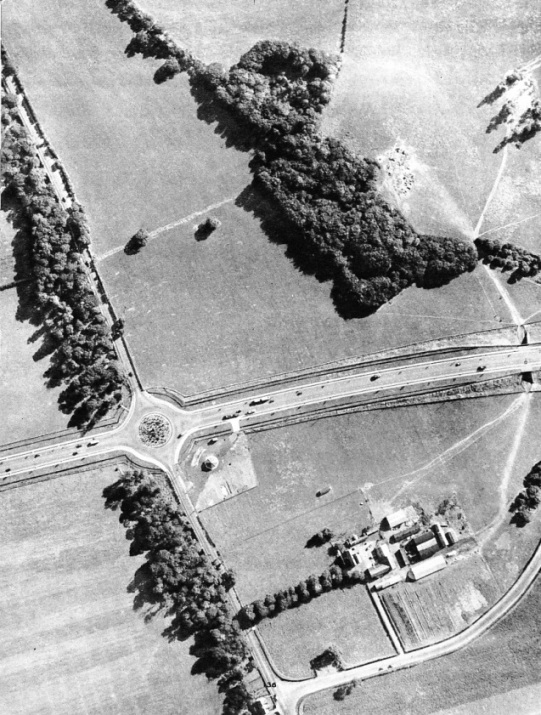 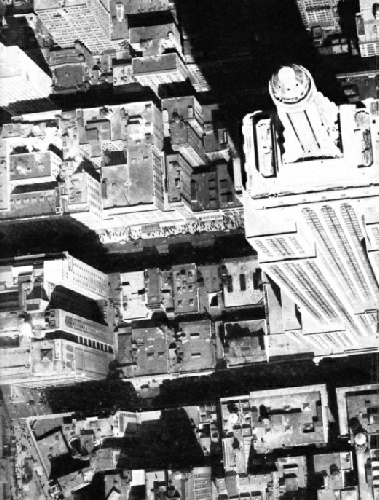 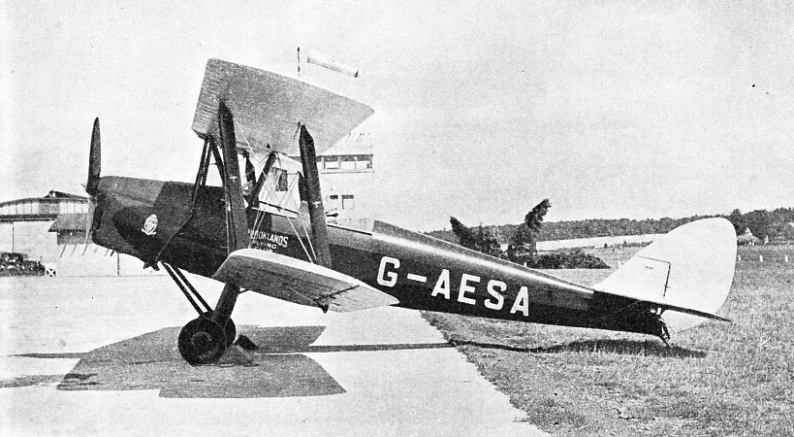 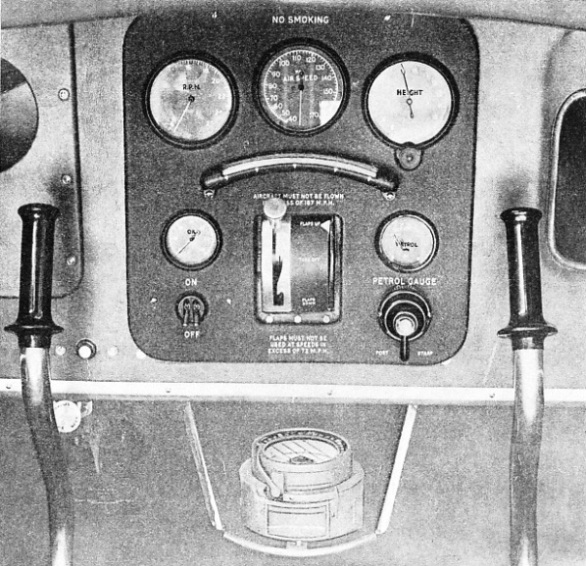 Along the top, from left to right, are the engine revolution counter, the air speed indicator (ASI) and the altimeter. Immediately below these is the bubble cross-level and, in the centre below that, the flap control, which has an intermediate position. To the left of the flap control are the engine oil-pressure gauge and the ignition switches. To the right of the flap control is the petrol gauge for indicating the amount of fuel in the port or starboard tanks. The compass is mounted below the instrument panel of the machine

How the upper air of the North Atlantic is charted. The story of the flights between Foynes, Eire, and Botwood, Newfoundland which began in the summer of 1937 to chart the upper air over the Atlantic. This chapter is by Claude Luke. 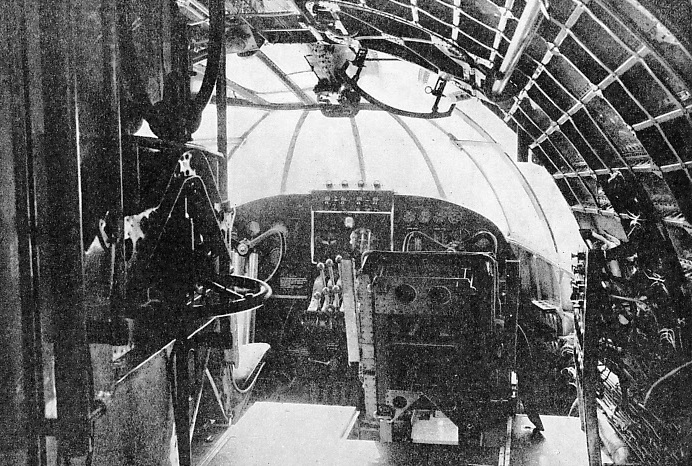 The Pilots’ Cabin of the Flying Boat Cambria

THE PILOTS’ CABIN of the Imperial Airways flying boat Cambria, which in September 1937 flew from Botwood to Foynes in 10 hours 33 minutes. This was a record trip. The rapid advances in flying times has been materially helped by the accuracy with which the meteorologists can forecast the weather and inform the pilots of any sudden change in conditions. 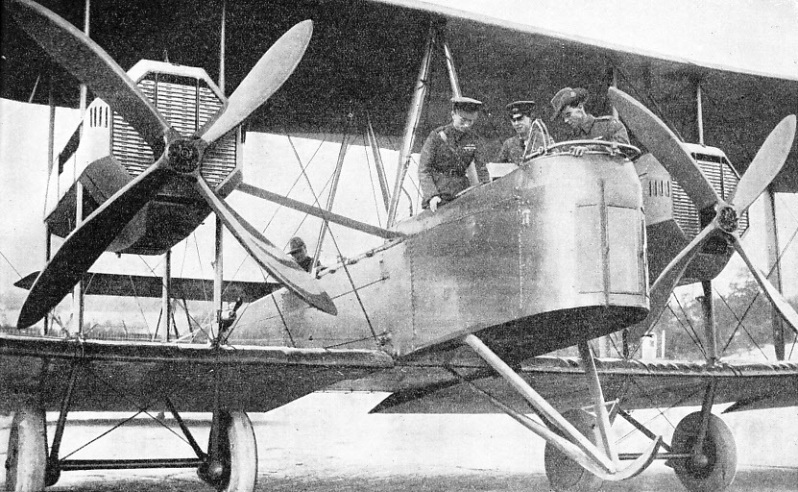